We’ve been asked to review these two backpacks from Eberlestock that look pretty similar. Some of our readers are asking what’s the difference between them. We want to address that issue in this article.

We’ve had the opportunity to use both the J79 Skycrane and the J51 Warhammer backpacks, and there are many similarities but also important differences. 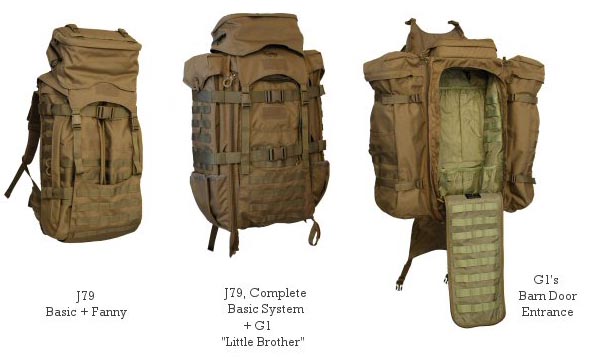 In terms of similarities, both packs share the same design, with the balloon packs that split apart to make room in the middle for attaching an extra pack like the G1 Little Brother, or an Eberlestock duffel bag (purchased separately).

1. The most notable difference is in the frame: the J51 has a modified Alice-type frame dubbed Intex II that goes through the inside of the top part of the pack and comes out at the bottom to form a cargo shelf, while the J79 has an internal aluminum stay frame with a plastic backplate. This fact already qualifies the J51 as a fitter choice for carrying heavy loads.

2. Another big difference lies in what’s included in each pack’s package:
The J51 comes with only the main pack itself, while the J79 comes together with the G1 Little Brother pack, and has the detachable LP1 fanny pack as its top lid. So with the J79, you are getting a 3-in-1 pack, while the J51 is only the main pack, and that explains the price difference between the two. Like the J79, the J51 is designed to be the base of a pack system, but in its case the LP1 fanny pack and the G1 pack need to be purchased separately.

3. The J79 is also narrower and taller than the J51, with the balloon packs on the J51 being larger than those on the J79.

4. In terms of expansion, the J79 comes with one set of zippers in the load bay, allowing to attach only one other bag like the G1 or a duffel. On the other hand, the J51 has two sets of zippers, one in the back and one in the front, which allows to attach not just one, but a couple of extra bags at the same time – could be the G1 and a duffel, or two duffels (have a look at the Spike Camp or SuperSpike duffels).

5. The suspension: both packs have similar back and lumbar padding, and adjustable torso length system, but on the J79 Skycrane the carrier’s back touches the backplate. The J51 Warhammer, on the other hand, due to its Alice frame, is virtually suspended from the carrier’s back and uses that spacing for better airflow.

The scabbard system is identical on both packs. A scabbard can be stuffed through the top lid, along the back wall of the pack, and out through a zipper opening in the bottom flap. The scabbard attaches to the Molle webbing in the load bay. The J51 and J79 can accommodate most models of Eberlestock scabbards, from the narrower A1SS, A2SS and A2LS that can take a scope rifle, to the wider A4SS for bulkier AR and AK-type weapons.

Is the .243 Win. the Magic Bullet for the Urban Sniper Rifle?