Self Defense Tips & 6 Non-Lethal Tools to Use for Protection

For the United Stated, the rate of violent crime reached the highest in the 1990s and it has been dropping ever since. For instance, back in 1991, no less than 758.1 out of 100,000 people in the US were victims of some violent crimes. The situation got better though as in 2016, only 397 out of 100,000 became unfortunate victims. Even if the numbers are good, 0 is what we all wish for and that can happen if you start carrying a self-defense tool.

Are you able to stop an attack?

We’ve all seen it in the movies, but an attacker in real life may not always look like a weirdo in the parking lot, waiting for you in the darkness. As a matter of fact, more than 80% of all rape victims knew their assailant before the crime. Keep in mind that most attacks are going to happen when you’re least prepared for reacting.

There are many self-defense courses out there and even online you can get some valuable lessons. Having the right reaction in the case of an attack may not save you, but developing a strategic plan will. From knowing when to run, when to defend or when to give your attacker what he/she wants- this is all info that you need to have in your defense plan.

Should you ever find in the situation when you have to react in order to survive, a reliable self-defense tool is going to make the difference. A gun, a tactical knife, a Taser or any other type of self-defense weapon has to be part of that plan. Needless to say, it’s mandatory that you also know how to use your self-defense weapon, especially in case of an attack.

You don’t have to become a victim and here are some things to have in mind when fighting back:

You should be able to reach for your self-defense tool instantly; you’re not going to have minutes until you go find it at the bottom of your purse. You should have the weapon easy to access at all time. Even if you put it in the purse, you should put it somewhere where it’s easy to reach. You should even hold it in your hand when you go in the parking lot.

a self-defense tool becomes a part of you- that’s how well you should know how to use it!

Better safe than sorry, so if you’re not prepared enough, you should stay away from the risky people and dangerous places. Pay attention to your surroundings and stay away from the possible threats as it’s going to reduce the risk for an attack. You should also know the nearest exit or place to run for getting away in case of anything.

Installing a home security system for your home is going to protect your family and yourself so look in to it.

No matter the self-defense you’re going to go with, keep in mind that the main purpose of self-defense isn’t to win the fight, but to be able to get away without getting injured. Staying away from the dangerous places and people is the best way to defend yourself.

No one says that you have to be a well-trained Navy Seal in order to escape an attack; having a game plan and carrying a self-defense tool is going to give you some time and even the chance of a get away!

What choices do you have for self-defense tools?

Being a victim is awful but you can work on not becoming one by developing a plan and carrying a self-defense tool. Simply carrying it isn’t going to be of much use, which is why you should look into the options and decide which is going to fit you and your skills the best way. And once you have it, start trying it as often as you can. Last thing you want is to have a defense plan and even a self-defense weapon and not be able to pull the safety lock in the nick of time.

The diversity of self-defense carry items may be overwhelming, especially if you’re an entry level user. Take a closer look at each of them and think about which one fits you the most:

Your smartphone is many things and nowadays it works even as an efficient self-defense tool. Not only that you can use your phone for calling the police, but you can also use one of the self-defense apps available for both iPhone and Android.

A self-defense app can feature personal assault alarm, activating a loud siren, a torchlight on the smartphone (for drawing attention) and flashing multi-colored screen lights at the same time.

You can find self-defense apps that include also SMS messaging and social media messaging into alarm. This means that it can send out a distress call via Facebook, Twitter and text messaging the moment you activate the alarm, letting your friends know that you’re in real danger.

You’re still going to depend on other people to come for your rescue when using a self-defense app. The best way is to use it along with another self-defense tool that increases your chances for rescue. 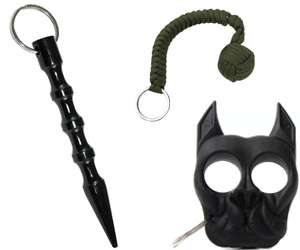 Truth be told, we all need other persons to rely on at times. personal defense makes no exception and you may alert other people that you’re in danger by carrying a whistle or a personal alarm (there are plenty of choices out there).

A personal alarm is typically rather small and you may perfectly attach it to your keys for easy and fast access. It’s really loud (around 130 decibels) and it’s definitely going to make one notice you when you’re in danger. A personal alarm may also include a backup whistle so that you’re all covered if the alarm batteries wear out. 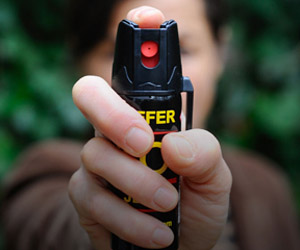 Fast, easy to use and really efficient, the pepper spray has been a solid choice as a self-defense item to carry for quite some time now. It does cause the irritation of the eyes, skin and even of the respiratory system. bear in mind that the pepper spray isn’t going to stop your attacker; it’s only going to win you some time as it slows down the attacker.

As a matter of fact, the pepper spray is rather a diversionary self-defense weapon that gives you time to run away.

You can find pepper sprays out there are lightweight and also include UV marking dye which helps the police to identify your attacker later on. A pepper spray with spring-loaded flip to reduce the risk of triggering is one valid choice.

src=”https://rangermade.net/wp-content/uploads/2019/03/Self-defense-Tactical-pen.jpg” alt=”Self-defense Tactical pen” width=”300″ height=”250″ />One of the sneakiest and smartest choices within the category, the tactical pen isn’t only effective, but also very well hidden and able to mislead your attacker. If you’re not comfortable about using a tactical knife or anything with blade, the tactical pen is the best choice for you. And it does work as a pen as well.

Even if using a tactical pen works, it can only be efficient when used right and in combination with another type of self-defense tool (an alarm to make people hear that you’re in danger). You should use the tactical pen as a secondary self-defense carry tool. Using a whistle or a personal alarm together with a tactical pen may work best in some situations. 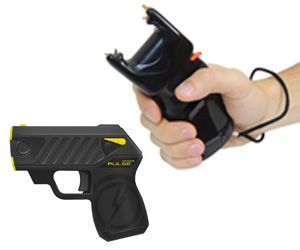 The Taser is quite a popular item and many use it because it’s dependable and puts your attacker to the ground for at least 5 seconds. Believe it or not, 5 seconds is going to be enough for you to get enough distance from your attacker.

The variety of stun guns out there is quite generous. For instance, you can find models that come with Snatch Prevention feature. This means that the stun gun has two shock plates along the side of the Taser, which give a high-voltage shock when the attacker attempts to take the Taser from you. A LED flashlight is also a good feature as it gives you the possibility to use the stun gun as a flashlight. 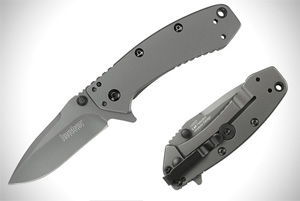 The most dependable self-defense weapon to carry is, for sure, the tactical knife. As a matter of fact, a tactical knife can be more efficient and even lethal within 20 ft., as comparing to a gun.

A tactical knife works in many situations, not only in life-threatening ones. A good tactical knife should be lightweight, easy to carry and to use. If you’re going to use a fixed blade knife, a 3in blade is going to be a good length for defense situations. It should have a good build, a sturdy grip and a comfortable feel in your hand when using it. The right size for your hand, the possibility to access it easy and fast-these are only few of the many things that matter when selecting your tactical knife.

No matter how tempting a low-priced tactical knife may be, you should never get cheap when buying one. You shouldn’t put your life at stake with a $5 tactical knife, right? It’s better that you go take a look at the market as there are plenty of options that are strong, reliable and don’t break the bank either.

Keep in mind that you’re not going to encounter many acceptance problems when using a tactical knife, as comparing to guns anyway. As long as you don’t carry it with you in a court, school, plane or federal building, you can practically carry a tactical knife in all sorts of places.

Even if you’re not going to have to take a class for learning how to use it, you should practice with it any now and then. A knife that you’re not able to use is a useless knife, nevertheless.

Even if there’s a slim chance for becoming a victim, why take the chance? Why not make a plan so that you never become one? The choices are many and don’t even require you some long-time classes or practices. When it comes to violent crimes, it’s better to be safe than sorry!

How To Camp In The Winter