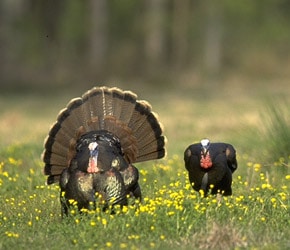 The fortunes of wild turkey hunters are subject to an ebb and flow during the season. A long well-timed turkey season can be divided into three phases based on how the toms react to calling and what the hens are doing. Good hunters understand the wild turkey and vary their methods based on the attitudes of the toms they are hunting.

In the early part of the season, it is tough to call in toms that are henned up. No matter what sexy promises you make to them in your calls, these big toms stick with the hens they have in full view. You have two choices; hunt them off of the roost and call in the whole flock, or hunt in the midday when the hens are off to lay an egg.

When the hen numbers in a group of turkeys dwindle, it gets easier. As the last hens start sitting on their nests, there is a major shift in behavior. The toms move more, gobble thoughout the day and often answer and come willingly to a call. That is when the wary older toms are likely to be taken. Hunting is often very good for ten days to two weeks and then the toms seem to catch on that the breeding season is over and no longer gobble their heads off.

The last of the season is often after the second peak of gobbling and things have quieted down. The birds have been hunted in most places that allow hunting. The hens are all on their nests and the toms have ended their frantic search for the last receptive hen. Occasionally toms will find a hen that is nesting late or renesting. Late season toms can be taken and they can even be lured in by calling, but it may take more patience and effort than a scant ten days before.

Turkeys that have been hunted hard may even run from a call in the late season. It is time to reduce your reliance on calling and depend on woodsmanship and scouting to bag a tom. The cover has thickened up and it is easier to move unseen to get ahead of birds and set up for them. It is a time to rely more on scouting and knowing the land and the habits of the turkeys on the land.

The late season always has a few days of stormy weather. The day after a storm passes is usually a great day to hunt. Turkeys are likely to spend more time in the woods scratching for bugs that come up in the moist leaf litter after a good rain. If you can get out just ahead of a thunderstorm, the toms will often gobble at the thunder. Morning thunder squalls are a great way to find the roost. Do not risk hunting in the storm. Sitting at the base of a tall tree or walking in an open field with a conductive object pointed skyward is not a smart thing to do.

Warm weather and winds seem to be a regular part of the late season. High winds usually make turkeys more cautious. Yet you can use the wind to your advantage. If you think that the toms are still responding to calls, call from the upwind side of the best turkey cover and be more patient. You may not hear an answer to your calls, but your calls will be heard a greater distance so it is best to wait at each good calling spot longer.

Another problem for late season turkey hunters in many areas. These small arthropods can make your life miserable. Not only do they leave an itchy welt, but they can carry Lyme’s disease and Rocky Mountain spotted fever. Insect repellent on the skin of your neck and wrists, at the top of your socks and on the junction of your shirt and pants will reduce the number that make it to unprotected skin. In areas with heavy infestations of ticks, you should consider using one of the several maximum strength repellents made for treating clothing. When your return from a hunt take off your outer layer of clothes in the garage and put them in the washer and take a hot bath and conduct a careful “tick inspection”.

If you often bump into turkeys headed your way when you are moving to another calling spot, or if you look back to an area where you stopped to call and see a love sick tom standing where you had been sitting, it is a good indication that you are moving too soon. If you loop back to near where you called an hour or more before, it is a good idea to set up and call again. Learning when to move and when to stay put is an art that is acquired over years of turkey hunting.

In the last days of the season it is time to try different things. If you see a lone tom, try going “yelp-less.” Get in as close as you can to the bird and use very soft calls like a purr and a cluck and wait a bit and do it again. If that does not bring him in, raise the level to soft yelps and jake yelps. If that does not attract him, try a gobble that folds into more jake yelps.

Lovette Williams, an expert on the vocabulary of the wild turkey, calls the gobble that trails off into a jake yelp series an apprentice gobble. Jake yelps are easy to make with the deeper toned side of most box calls. The jake yelp is fewer notes, deeper toned and a little slower than a hen yelp. If you can make a tom think that a young upstart has found a receptive hen he will often throw caution to the wind and come in strutting.

When you find several mature toms together that will not come to a call, a good technique is to sneak as close as possible and wait until they are spread out and pointed in different directions and run at them yelling as loud as you can to bust them up. If you can break them up, they will try to regroup in a short time. Watch where they go. Follow the biggest group and get where you are between them and the others. Go only about half the distance that you think that they went and set up and give the area 20 minutes to settle down. Start calling with a few gobbler yelps or clucks. If they start to call, answer them with the same calls. If they are quiet, call very sparingly or stay quiet as well. Your goal is to have them regroup on your calling location.

If you can bust up a flock of toms just before they roost, they are likely to try to reassemble in the morning. Get close to one roost on the same side as the separated birds. A few soft hen yelps or a cluck is enough. Do not over call.

Late season turkey hunters in open areas of the Midwest and Great Plains have an advantage over those who hunt forested areas. It is often possible to see groups of toms in pastures or stubble fields and see where they are headed. It is always easier to call a turkey the way that it wants to go. When trying to get ahead of a turkey add 25 percent to where you are going. Turkeys always seem to move faster than hunters think.

It is harder to bag a bird in the last part of the season, but it is not impossible, and it does not have to be an ambush. Do not give up. Late season hunting can shake your confidence a little, but you will learn a little every day that you pursue what many consider to be North America’s premier game bird.