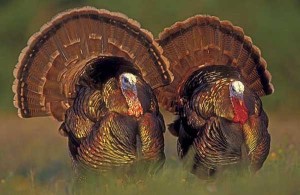 An experienced turkey hunter had driven an hour and walked over a half mile to get into position on the edge of a turkey roost in an isolated place on private land. The woods were quiet as the first pale fingers of dawn appeared in the east. He waited and thought, ” I only have four more days to hunt this season. Today is going to be my best chance.” Just as he reached for his owl call a nearby barred owl broke the morning silence with a hoot and a chorus of owls chimed in with their nine-note, who cooks for you, who cooks for you all.

Gobbles, hen yelps and even more owl calls thundered through the woodland, confirming that his scouting had pegged the flock and he was in a great position. He had an opening in front and gobbling birds on three sides. He let the calling subside and then got out his slate call and gave a soft series of tree yelps and three toms interrupted with powerful gobbles. The calling continued for almost 20 minutes.

In the improving light, he could make out the shapes of seven birds in the roost and one was a huge tom that was displaying in the tree! He slowly pulled his gun up to a ready position on his knees and saw movement on the ground at the edge of the opening to his left. He strained to see. He could see a patch of white like a tom’s head. It looked like a large bird but it was not clear. It was less than 40 yards out, but low light and an obscuring dogwood thicket made it hard to see.

He gave a soft purr and a single cluck. The shape stopped and seemed to turn toward the opening. On this cue, he eased his finger forward of the trigger guard of his 12 gauge Beretta AL 390 to take off the safety and slowly raised the shotgun to his shoulder. Once again he strained to see. He could not see a beard. Suddenly the white patch disappeared and the shape changed to where it was not like a turkey at all. No! It was another hunter crawling through the thicket to get close to the roost.

He had been so close to shooting at what looked like a tom’s head that his voice quivered when he called out, “There is another hunter here. Don’t shoot!”

That sort of close call can happen in the turkey woods even on private land where you think that you are the only hunter. Thankfully he made certain of his target and did not rush a shot. Later he learned that the white he had seen was an inside-out pocket on the other hunter’s coveralls.

Accidents and close calls like the one above have stimulated state wildlife agencies and the National Wild Turkey Federation to examine how turkey hunting accidents happen to learn how they can avoid the common causes of turkey hunting accidents. The result of their effort is the “Hunt Safe” program which is a common sense, effective and defensive way to hunt turkeys.

First of all the reputation of turkey hunting as a dangerous sport is not deserved. You are more likely to be injured while swimming or boating or on your way to hunt in your vehicle than you are on a turkey hunt. Turkey hunting accidents do have a tendency to be more severe as hunters are often mistaken for a turkey.

A shot at a wild turkey is usually a very deliberate thing. There is ample time to be sure of the target. If you are close enough to see a beard and the bright red head of a tom there should be no mistakes. There should be zero turkey hunting accidents.

Here are the rules for safe turkey hunting:

It is important for all wild turkey hunters to pause before the start of the season and think about hunting wild turkeys in a way that is fair to the turkey and safe for all who hunt.

More information about turkey hunting can be obtained from the National Wild Turkey Federation web site at http:// www.nwtf.org.