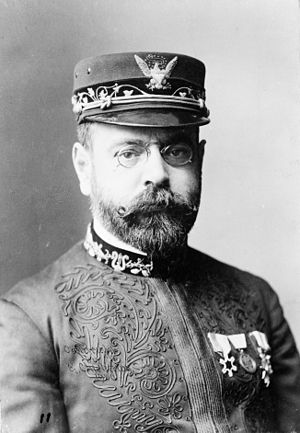 “…let me say that just about the sweetest music to me is when I call ‘Pull!’, the old gun barks, and the referee, in perfect key, announces ‘Dead!'” wrote composer John Philip Sousa in “Sweet Music at the Traps,” an article appearing in the January 15, 1916 issue of The American Shooter magazine.

The American Shooter was the official publication of the newly formed American Amateur Trapshooter’s Association, and the A.A.T.A.’s first president was none other than John Philip Sousa.

Serving two terms as the fledgling A.A.T.A.’s president, the “March King” was never reluctant to lend the weight of his enormous celebrity to popularizing trap. Sousa wrote frequently on the subject of trap for newspapers and magazines and appeared in DuPont powder company ads, extolling the virtues of trapshooting as an “active, muscle-building, fat-destroying, lung-developing hobby.”

His enthusiastic promotion of the sport contributed in no small part to trapshooting’s rapid growth in the early years of this century.

Sousa, whose patriotic airs earned him the nickname “The Kipling of Music,” was born on November 6, 1854, in southeast Washington D.C. near the Anacostia Navy Yard. His father, John Antonio Sousa, was a trombonist in the Marine Band. The elder Sousa frequently took his son hunting along the Anacostia River where today a bridge near their old hunting grounds bears John Philip’s name.

A gifted musician from early childhood, John Philip Sousa followed in his father’s footsteps, joining the Marine Band at age 13. In 1880, he was named leader of the Marine Band and served for 12 years. Leaving the service, he formed the renowned Sousa Band, and himself became world famous as a bandleader and composer. Sousa rejoined the military in World War I, training musicians at the Great Lakes depot in Chicago and eventually attaining the rank of Lieutenant Commander in the Navy Reserve.

Although he is better known to us as a trapshooter, Sousa’s first love in competitive sports was baseball. The Sousa Band team played exhibitions wherever they traveled, including the first baseball game seen in Paris. At age 46 however, Sousa decided he was too old to pitch for his team any longer. Hanging up his spikes, he began shooting trap, registering over 35,000 clay targets in his career.

Never a top shot, Sousa was a tough competitor among shooters of his own ability. In 1910 he won the open class of the Vermont State Shoot, breaking 78 of 80 targets. That same year he shot a 95 in the Southern Preliminary Handicap, losing to an All-America shooter, Chan Powers of Illinois, who broke 97. In 1913 Sousa won the Berlin handicap at Ocean City, Maryland, scoring 94×100 from the 18-yard line.

He often rode to tournaments on horseback; in 1916 he logged over 1,000 miles in the saddle traveling from shoot to shoot. Sousa’s attendance at a tournament always made local headlines and attracted throngs of curious spectators. He was a popular post-tournament speaker and often donated concert tickets to be awarded as prizes.

Sousa’s promotion undoubtedly played a part in the growing popularity of trapshooting, although a DuPont powder ad appearing next to an article by Sousa “Trapshooting, My Hobby” in the June, 1914 of Country Life offered another explanation. It read, in part: “Get in the trapshooting game now. WHY? The Federal Game Law now in force limits hunting to three months of the year. Trapshooting comes to the rescue of the owners of idle shotguns.”

Many shooters, discouraged by shorter seasons and less game, did take up trapshooting. By 1915 there were an estimated 400,000 trapshooters in the United States.

The Interstate Manufacturers and Dealers Association, a group made up of powder, shell, and gun manufacturers, had governed American trapshooting since 1892. The I.T.A. devoted itself primarily to organizing tournaments, and although the Grand American attracted 828 shooters in 1915, its largest field ever, there remained thousands of recreational and club shooters with no group to look after their interests. To meet their need, the American Amateur Trapshooter’s Association was founded on December 23, 1915, and the nation’s best known trapshooter, John Philip Sousa, was appointed its president.

From the beginning, the A.A.T.A. was a group run for and by amateurs. Professional shooters were not allowed to hold office. In an article for the second issue of The American Shooter, published on January 15, 1916, President Sousa summed up the purpose of the new organization: “…the new amateur organization should band together the amateur shooters with bonds of common fellowship as the Interstate could never do. For it is our intention to interest the beginner and make him feel that he is a member of a great sport family and one in which he may compete and be rewarded as he progresses in the game.”

The A.A.T.A. strived to foster shooter development at all levels by promoting weekly club shoots and also through its medal plan. A.A.T.A. members holding 75 percent averages were eligible for a bronze medal, 80 percent earned the aluminum medal, and so on up to the 95 percent medal, which was gold with an inset diamond. Eventually a gold 98 percent medal was added as well. The A.A.T.A. offered a series of women’s medals, and also buttons for beginning shooters–starting with a 50 percent award.

The A.A.T.A. lasted until September 20, 1918. The Interstate Association had begun offering individual memberships earlier in that year. Recognizing a common purpose and the undesirability of two competing membership organizations for trapshooters, the two groups merged. The American Shooter, renamed The New American Shooter, became the official publication of the Interstate Association, which soon changed its name to the American Trapshooting Association. The A.T.A., of course, governs American trapshooting today.

Sousa did not serve on the board of the new group although he did represent New York as a delegate to the A.T.A.’s annual meeting in 1920.

In 1917 however, Sousa did become president of another shooter’s group: the National Association of Shotgun Owners. The aim of the N.A.S.O. was to organize the estimated 10,000 shotgunners in the nation and to train them via trapshooting. Although not paramilitary in intent, and incurring no obligation of service on its members, the N.A.S.O. nevertheless hoped to mobilize trained shotgunners for home defense and riot control duty during times of emergency or invasion. Sousa served one term as president, Few records survive of the N.A.S.O. but it seems unlikely the organization survived the Great War that prompted its formation.

Although Sousa frequently voiced his disapproval of live bird shoots, he was an avid hunter, owning hunting preserves in South Carolina and Georgia at various times in his life. He traveled to the South frequently throughout the shooting season, hunting waterfowl, quail, and rabbits. Having once shipped a pair of hunting horses to Georgia for a two-week quail hunt, he then invited his guide on an impromptu horseback ride back to New York–a trip of one month’s duration!

By all accounts a genuinely nice, unassuming man despite his considerable wealth and fame, Sousa was as comfortable in the company of the guide as he was meeting Edward VII of England. Edward, one of the famous shots of his day, discussed shooting with Sousa whenever the two met during the Sousa Band’s European tours. On one occasion the king presented Sousa with a brace of mounted pheasants, which the composer treasured.

If forced to choose between hunting and trapshooting, Sousa probably would have picked trap, in part because of his love of competitive games, and also for what he perceived as the leveling of all contestants by the conditions of the trapfield.

In an article for the January 18, 1911 edition of the London Sketch he wrote: “In field shooting, water fowl shooting–in fact, in every form of live bird shooting–there is an element of chance where luck plays an important part. The conditions of the sport are so evenly distributed in trapshooting that, everything else being equal, it is up to you, and you alone, to ‘make good.'”

In “My Hobby–Trapshooting” for the June, 1914 issue of Country Life in America, he touched again on the same theme: “…the Nimrodic Munchauasen can metamorphose six cat birds into fifty braces of pheasants without mussing an infinitesimal strand of his capillary substance. But woe to the trapshooter who deviates from the primrose path of rectitude. Referees, scores, shooters and spectators will bid him be truthful, for theirs is the knowledge, and his the perfidy.”

In his later years, Sousa’s trapshooting scores declined precipitously, due in part to a bad fall from a horse in 1921 that injured one arm. A photo taken in Atlantic City in 1926 shows a 72-year-old Sousa gamely shooting trap one-handed. Finally, however, Sousa switched from trap to golf, a game he had long said he would take up when he was too old for any other sport.

Sousa died in 1932 at age 78 in the Abraham Lincoln Hotel in Reading, Pennsylvania. The Sportsmen’s Review eulogized: “In his death the trapshooting world loses a real earnest supporter, one who looked upon the game as the sport of men, who are men among men.”

In 1916, the Ithaca Gun Company had paid fitting tribute to Sousa by presenting him with one of its new Sousa Grade trap guns. The original order for Sousa’s gun, placed on December 21, 1916 for serial #274337-T, calls for a gun with a great deal of engraving but no gold or silver save a gold medallion with the initials “JPS” on the stock. The gun has a 32-inch barrel and weighs eight pounds. Built to Sousa’s measurements, the stock and forearm are scaled for surprisingly small hands. The comb is unusually thick–nearly two inches across the top.

The gun is now in the possession of the Trapshooting Hall of Fame at the A.T.A. headquarters in Vandalia, Ohio. In 1985, Sousa was inducted into the Hall in tribute to his enthusiasm for the sport, his skill at the traps, and his role in shaping the government of trapshooting as we know it today. On August 13, 1985, his photograph took its deserved place on the wall of the Hall of Fame among the other greats of the trapfield.