Have you ever seen Rock Salt Lamps in Spa, Meditation & Therapy Centers and wondered why they’re there? What makes them the perfect decorative pieces for all these health centers? Well, this can be attributed to the fact that Himalayan Salt lamps aren’t just for decoration. Real Himalayan salt lamps have the ability to purify an entire room.

These crystal salt lamps comprise pieces of Himalayan salt crystals. The light source inside the lamp along with the constituent salt gives rise to negative ions, which in turn has positive effects on the air inside a room. Let’s take a look at some of the amazing benefits.

Almost every appliance, say the computer in the spa center or the phone you and everyone else carries around everywhere, is constantly leaking positive ions that go into the air.

These, combined with other charged particles, can cause a surplus of Electromagnetic Radiation all around us, which is considered to be bad for health. Fatigue, increasing stress, and a messed up immune system accompany such an overexposure to EM radiation.

The best Himalayan salt lamps balance this out by releasing negative ions in the air and canceling out those positive ions. The end result is that the air neutralizes, with neither negative nor positive ions overwhelming your body. Static buildup and artificial frequencies are also dealt with.

Lining our windpipe, cilia, which are nothing but finite hairs, perform the job of breathing filters. Studies show that positive ions have a negative effect on cilia and decrease the activity rate. On the other hand, negative ions seem to prove beneficial.

As such, real Himalayan Salt lamps can improve the breathing of a person by releasing negative ions which help in filtering foreign particles and clean the lungs in general. 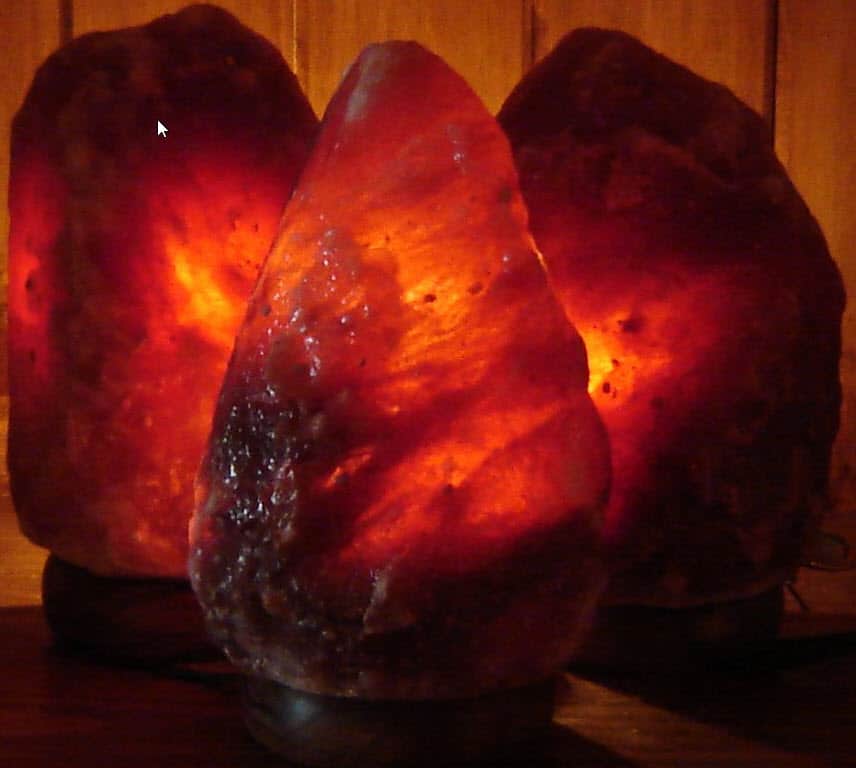 Himalayan pink salt lamps clean the air through a process called hygroscopy. Salt crystals from the air around us attract and absorb contaminated water molecules and lock them inside.

Through this mechanism, cigarette smoke, dust, and a lot of other harmful particles floating about in the air we breathe are easily removed. This is perhaps the greatest advantage of buying Himalayan salt lamps since salty air is good for health in general and can purify the air too.

Dust, mold, mildew, and other such particles can also filter through Himalayan Rock Salts inside a room. Just like how the salt helps in clearing the air, allergy symptoms of all kinds also take a backseat.

There have also been reports of people struggling from asthma feeling better under the protection of Himalayan rock salts. As such, they are so incredibly beneficial for breathing that manufacturers have started producing inhalers for patients of asthma, bronchitis, and other respiratory diseases.

There’s also the possibility that the negative ions released by Himalayan salt lamps have the potential to safeguard one against germs in the air.

Not only does the salt remove dust, but it also assists the body’s own filtering system in effectively preventing foreign particles from making their way into the lungs.

This way, the lamp is able to keep away any coughing, sneezing, and other symptoms of a common cold, such as a sore throat.

Certain studies propose that the negative ions emitted by Himalayan salt lamps aren’t just good as a preventive measure against electromagnetic radiation and for improved breathing, but can also accelerate blood flow in a person’s body.

A physique with improved blood circulation translates to a natural avoidance of several kinds of disorders in the vascular system and even any damage to the lungs. The heart also receives a boost from better blood flow, thereby improving the overall health of a person.

Many people aren’t aware of the fact that positive ions absorbed by your body can suck up your energy levels. However, the presence of Himalayan salt lamps has the opposite influence.

The negative ions released by rock salt lamps can bring in a positive outcome when it comes to one’s energy levels. This is quite similar to the results of spending extended periods within nature surrounded by greenery.

The exposure your body gets to negative ions reduces the overall stress your mind and body face and improves your performance in general. Through negative ions, the supply of blood and oxygen to one’s brain gets a boost, making Himalayan salt lamps great for one’s concentration.

Another thing is that rock salt lamps encourage the production of the neurotransmitter serotonin, which is a chemical associated with happiness. A happy mind is naturally more focused and active.

As mentioned before, the mood and energy levels of a person can increase by a generous amount with the help of negative ions, or so the studies suggest. This is due to the influx of serotonin in the brain owing to these salt lamps. For people affected with SAD and other disorders pertinent to depression, this might be worth a try.

When a person exposes oneself to excessive amounts of positive ions, the blood and oxygen supply to the brain reduces by a worrying margin. The resulting lack of sufficient blood flow and oxygen can lead to unhealthy sleeping patterns. One might get a bout of sleep at the wrong time of the day and find it hard to rest at night, or even sleep entirely during daylight hours while remaining wide awake at night.

As the negative ions emitted by Himalayan Salt lamps are thought to have the exact opposite effect on oxygen circulation and blood flow, one’s sleeping pattern, as a result, corrects itself. Also, since the person with salt lamps in the room ends up with a direct connection to chromotherapy, the soothing lights also protect against insomnia.

In spas and meditation centers, this is one of the most widely-promoted benefits of Himalayan salt lamps. The lamps are said to aid with the process of color therapy or chromotherapy, which is an alternative treatment method used for a large variety of illnesses.

Soft lights in a combination of orange, yellow, and red help one relax, reduce any stress felt by a person, and even take care of an attention-deficit disorder. These soothing, warm lights can even help a person on a physical, emotional, and spiritual level. This is why therapy and meditation centers have them all around to immediately relax anyone who enters the place.

You now know the vast number of ways in which real Himalayan Salt lamps can improve your health and lifestyle in general. So, it is time you set about purchasing one.

Whether you plan to open a spa or meditation center, or just need one for your home, Fab Glass and Mirror has different kinds of salt lamps in several varieties, such as decorative lamps or salt candle holder.

Not only do you have the choice to breathe in cleaner air with this lamp and greet a healthier life, but they’re also quite amazing for decorative purposes and can make you feel better just by taking a look. Fab Glass and Mirror also has night lamps that will help you sleep better at night with those dim but trance-inducing lights.

Is it Safe to Carry a Laptop in a Backpack while Traveling?