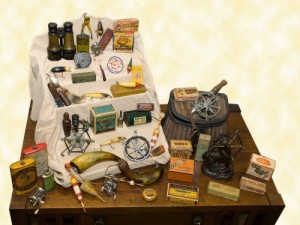 When the experts from Antiques Roadshow were asked about things to collect in the next century, what do you think they suggested? How about Ducks Unlimited stamps and wildlife paintings?

Surprised? Don’t be. Antiques Roadshow appraiser Judy Campbell says if you’ve ever attended a DU (Ducks Unlimited) grassroots event, you may be an unwitting collector. Her advice: Hold on to what you’ve got! “All forms of mementos, old and new, from this trailblazer organization are predicted to be hot in our new millennium. Collectors are presently seeking early Ducks Unlimited pins, sponsor buttons, decanters, steins, and decoys,” says Campbell.

The same situations exists for items from the other conservation groups–Rocky Mountain Elk Foundation, National Wild Turkey Federation, Quail Unlimited, Pheasants Forever, and the Ruffed Grouse Society. In fact, items from the smaller organizations might be worth even more in the future because there will be fewer of them.

Antique fishing tackle is also a hot collectible, with some old lures bringing hundreds of dollars at swap meets around the country. Hand-made turkey and duck calls, bamboo fly rods, and all sorts of other outdoor memorabilia will, no doubt, increase in worth as the value and nostalgia of a “wilderness experience” soars in the coming decades. 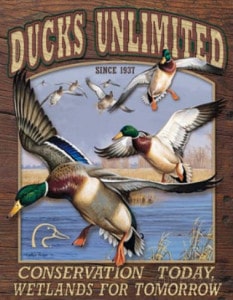 the B.A.S.S. Classic. I’m not sure what the collection is worth, but I know it would take stupid money to get him to part with them. With Denny Brauer now on a Wheaties box, who knows? Are bass fishermen a rising cult of outdoor heroes? If so, my buddy just scooped the outdoor world with his collection. Use your imagination to spot collectibles others overlook.

Firearms will always have an appeal as collectibles, and once again, rarity and uniqueness, as well as condition, equate to value. But another variable–historical significance–multiplies value exponentially. For instance, an 1873 Colt Peacemaker owned by Wild Bill Hickock, in 60 percent condition, might fetch $100,000, while a 95-percent gun owned by my great-granddad, who was an ignominous squatter in Indian Territory, is worth only $14,000.

A hundred years from now, or even fifty, a 1999 Franchi Quail Unlimited Gun of the Year, is going to bring a whole lot more than a 1999 Franchi 620. The silver receiver with the QU logo and the flying bobwhites in gold, the up-graded wood, and a unique serial number, will greatly increase the gun’s value. A high-grade gun will always be more collectible than a standard grade. Double guns such as over/unders and side-by-sides will probably bring more than semi-autos because of their historical roots. But don’t discount the possibility that semi-autos could be banned as they have been in other countries, making them rare, or even contraband. A rule of thumb for scatterguns is that the smaller the gauge, the greater the value.

A tip in collecting commemorative series guns from the conservation organizations is to buy one each year in the same serial number. Maybe you can’t get gun number one, but a group of six or ten guns in the same serial number increases the uniqueness and value of the collection. Guns of the year from the various conservation groups should hold their value better in the long term than a standard grade gun, and the money goes to a worthwhile cause. A phone call to the organization’s national headquarters will generally reserve your serial number.

Buy Things You Enjoy. Collectors should be passionate about their collections, so it only makes sense to pursue what you enjoy. Surround yourself today with things that bring you pleasure while you collect for tomorrow. If fishing is your thing, collect lures and rods rather than hand-carved decoys. If you’re truly collecting for tomorrow, you’re going to have to live with your purchases for more than a few years, so why not travel life’s road with companions you enjoy?

Buy the Best You Can Afford. Perhaps the first rule of collecting is to buy what is rare, not what is popular. When objects get mass-produced, they are just too common to become valuable in a reasonable length of time. Rarity is the reason diamonds are valuable and not coal. But you never know, today’s lump of coal could become tomorrow’s diamond. But generally, that is because time has made what was once commonplace, rare.

The three golden rules of collecting–condition, condition and condition- also apply to the antiques of tomorrow. Avoid an old shotgun with a cracked stock and browned blueing. Collectors call these roaches and won’t pay much for them today or in the future. Still, if the price is right, I can’t turn one down; roaches are always good trading material to those less knowledgeable. Avoid anything that has a missing piece or is in less than mint condition. In other words, spend a few extra bucks today and reap big rewards tomorrow.

Spending time in the outdoors is a way of life for many of us, and our homes and offices are perfect places to display our passion with outdoor collectibles that serve as reminders of times past and memorable days spent afield. The fact that collectibles appreciate in value is just frosting on the cake. Collecting outdoor memorabilia can even become a sport unto itself. The season’s never closed, and there are no limits.

Is the .243 Win. the Magic Bullet for the Urban Sniper Rifle?