Using a dull knife in the kitchen may not be a tragedy (even if this doesn’t make it less dangerous), you sure want to have your tactical knife sharp at all time. Not only that a proper sharpening is going to expand the durability of your tactical knife, but it’s also going to help you know that you can rely on it in any life-threatening situation.

The fastest, smallest, cheapest and simplest way to sharpen your knife is to use a pull-through sharpener. By all means, some sandpaper, cardboard or even a car window may work at times, but you shouldn’t skip a proper sharpening session of your knife any now and then.

What counts when sharpening your knife?

Even though it seems easy, the proper sharpening of your knife depends on several aspects. Let’s take a closer look at each of them:

The angle of the knife to the sharpening surface is one thing to consider when sharpening. The angles of knives may range from 10 to 30 degrees (and even bigger than that). Some think that 15-20degrees on each side is a good number, as it results into a 30-60degree angle cutting edge.

There are several ways to identify the angle you’re at while sharpening and you’re going to be able to appreciate just by holding the knife after some long time practice. Here are some suggestions:

There are multiple ways to remove the steel. Some remind you of cutting a stamp off of the surface of a stone, whereas others involve circle movements. Going back and forth, on the whole length of the stone is one fast and effective way to do it.

Here are some tips when removing the steel:

Is it difficult to know when you’ve established the edge?

Knowing it you’ve established an edge or not may be tricky, mostly because sharpening may lead to a small burr on your knife’s edge. Tiny particles of steel that hand on the very edge of the blade are creating the burr.

Here are two ways to identify the fine edge that you’re aiming for:

This is one misleading way to tell if you got your edge on the knife. It’s quite common for one to run the thumb over the edge and think that the knife is sharp, when it’s far from it. This is because of the burr as the small particles do feel sharp, indeed.

You should get rid of the burr and run your blade smoothly over a piece of wood a couple of times. This is going to remove the burrs, but it’s not going to ruin the edge in any way.

Get yourself a jeweler’s loupe for taking a good look at the edge. You may feel the burr, but you can also see it. The burr should be even along the whole blade.

What are the most “popular” mistakes when sharpening the knife for the first time?

Sharpening your knife is easy, sharpening the proper way is about a lot of practice and patience, though.

Here are some common mistakes related to the sharpening of a knife:

This mistake happens when you’re learning to sharpen a knife that is way beyond its use. You begin the sharpening; you don’t notice any progress about the sharpness of the knife so you think it’s a good idea to give it a try with another technique. But this is also going to result into a failure in less than 10 minutes so you decide, once again, to try yet, another method. You should never try to restore an edge that has no chance for that, unless you have no other option. Even so, it’s best that you take a break and wait until you get your strength back.

You may come back to it, but use the same technique and the same angle you had before your time out. If you’re dealing with some hard steel that has worn edges, you may need at least half an hour just to get an edge.

When you’re trying to learn how to sharpen knife, you shouldn’t aim for the dullest one in the house. You should get one that looks rather sharp (it may even be a new one). Ask someone that knows how to sharpen knives to do it for you and try to maintain that edge when the knife seems a bit dull. Most new knives don’t even come with a truly sharp edge. It’s best that you practice your sharpening skills on a fairly sharp knife as you’re going to get the chance to notice your real progress a lot faster. It’s also a good way to find out what works and what doesn’t. the moment the blade gets dull, take it to the stone and try working a bit for getting back the edge. It’s easier and more effective to do it on a regular basis and not for hours later in the future.

You should think about some aspects when deciding on the angle of your edge:

Sharpening knives and sanding wood are pretty similar. If you have to move plenty of material, you should begin with a coarse grit and move to the finer grit only when you got rid of the steel you need, using the coarse grit. Do due diligence about the different grits.

How to take care of a knife?

It takes a lot of time, skill and patience to get the right edge and you never want to ruin your hard work over some stupid and minor mistake. 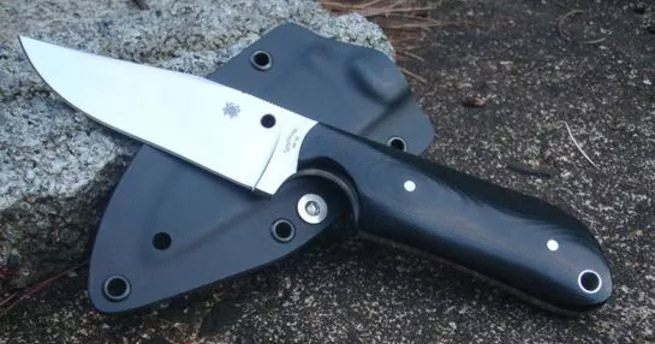 Taking care of a knife and edge is easy, but you should bear in mind some things:

One sharp tip as closure

Some say that sharpening a knife is only 10% tools and an impressive 90% skill. You should make time and get the will and patience for mastering the sharpening free hand with a couple of stones. This way you’re going to be able to sharpen a knife with anything that may work. Don’t wait for a machine to do it for you, as you’re forced to relying on it, even when you don’t have access to it. Once you’re able to sharpen a knife, you’re actually capable to sharpen all sorts of things!

Self Defense Tips & 6 Non-Lethal Tools to Use for Protection

The Different Ways to Sharpen a Hunting Knife

Should you choose a plain, serrated or combo EDC knife?