Trapping a Raccoon- Everything You Need to Know and More

Raccoons are quite common in several areas and they can become quite annoying, not to mention pretty dangerous too.

Even though some find them cute as they sure do make an impression with their looks, you may fall out of love when you find your trash all over the place. Having said that, here are some good techniques to use for trapping the nature’s pretty bandits.

How to bait the raccoon trap? 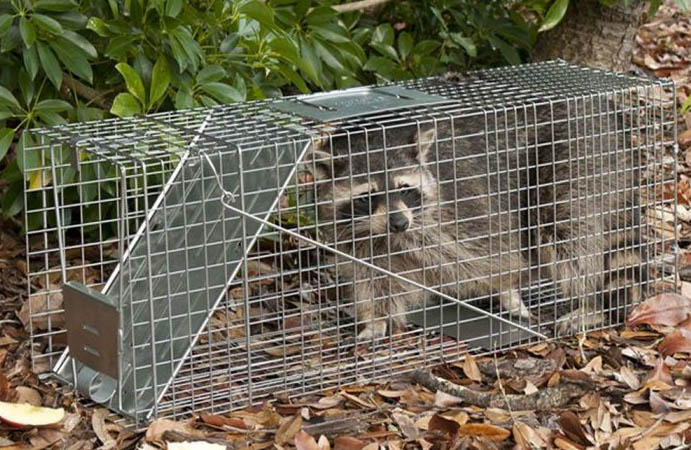 You should place the bait so that the raccoon has no other way for getting to it but entering the trap completely (tail included!). Raccoons aren’t that picky when it comes to food so they’re going to eat pretty much everything.

However, they really go for the foods high in fat and/or sugar. You may get impressive success with a combo of gravy and chicken parts. However, using meat products isn’t the wisest thing to do, especially if you have cats or dogs around your house.

Marshmallows are also a big hit in the case of baiting raccoons as they’re really high on sugar. You can make several holes in the bottom of a food can (tuna or cat food work just fine), using a zip tie to make sure that the can stays on the floor of your trap (some raccoons are smart enough to get inside the can without getting trapped). Put plenty of marshmallows inside the can. You still want them to be removed really easy, though. This is one of the most popular methods out there to trap a raccoon.

Truth be told, answering the question “What do raccoons not eat” is going to be a lot easier. They really like all sorts of foods so it’s not going to be difficult to find the right bait for them.

Omnivores and pretty greedy too, raccoons eat both plants and animals. Their sweet tooth is famous though and they’re quite obsessed with fatty and sugary foods. Unlike most of us, nothing is going to stand between them and their precious sweet treat.

Raccoons do feed on berries, vegetables and fruits in the wild, but they may also go for eggs, insects or small fish. They’re not going to get shy about eating some small birds or mammals either.

As there’s nothing much to eat in urban environments, raccoons had to adjust (we get the feeling that they’re not making a tragedy out of it, though) and eventually became scavengers. They’re able to open and turn over your trash can (sounds familiar?), to rip into your garbage bags and even steal your dog’s food from right under its nose.

In the wild, raccoons are perfectly capable to pluck small fish and even turtles from the water. They’re fast and they have strong claws that dig into the dirt, for finding bug larvae and insects. They also like fruits and nut trees and find the squirrels pretty delicious (we can only imagine!).

In the densely-populated/developing areas or in areas with not enough food, raccoons are forced to get in contact with humans. Most of them are just curious and they’re pretty easy to scare off too.

The situation takes for a turn when they discover your garbage. Nothing is going to stop them from keep on using it. You’re going to need to seal extremely tightly your garbage. Even so, raccoons are really determined when it comes to food and they’re going to do everything within their power to get to food. You may use a bungee cord from stopping raccoons and even put something really heavy on top in order to keep them away from your garbage (don’t be amazed if they still get to it, though!). 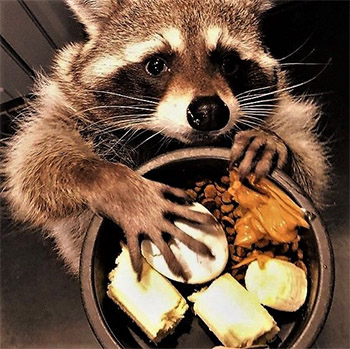 Raccoons aren’t picky at all when it comes to food so they’re gladly eat pretty much everything. They’re never going to be able to turn down some sugar, more than anything else. They’re even willing to drink leftover soda or beer straight from the can or bottle. They really go for peanut butter and peanuts and they’re quite obsessed with cat or dog food (wet and dry as well- not picky, remember?).

Note: truth be told, the reason for which raccoons are determined to eat any kind of food is that their palates aren’t very refined. Having said that, it’s easy to understand why you can use so many types of food for traps.

How many types of raccoon traps can you use?

Even though there are many and various ways to trap the infamous bandits, there are three main categories of raccoon traps: 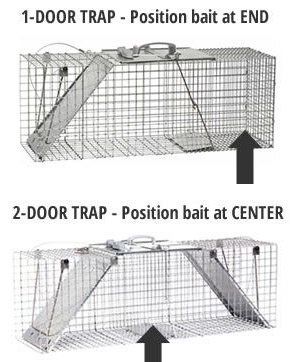 This is also known as the one door trap and it’s based on a spring-loaded mechanism to catch a raccoon. The animal is going to get through the open door as it tries to get to the bait (and it’s going to try, for sure!). The raccoon is going to step on the release switch, which is going to make the door drop into place really fast, trapping the raccoon.

This method is also known as the rear door trap and uses a spring-loaded door on one side. The door on the opposite side is going to slide open and close. You’re going to use the sliding door for placing the bait, but also for releasing the raccoon later on. This trap is great especially for the aggressive animals. 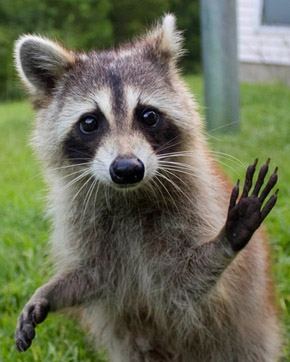 These traps are pretty various and they’re designed so that they snap the animal’s neck. Some may take hold of the raccoon’s leg instead.

Many use this type of traps when suspecting an animal for carrying some disease. If you’re planning to use the animal for food, this is the trap to use. Never use poison on a raccoon if you’re going to eat it. Chances are the poison has an attractive smell and taste for other domestic animals too. Last thing you want is to kill one of your favs as you’re trying to kill a raccoon for dinner.

Where should you place the trap?

This isn’t very difficult and you should set the trap where you typically notice the raccoons. It’s better to find a flat and stable surface for placing the trap. You may want to play it even safer and place a brick/other heavy object on top of your trap. The captured raccoon may be strong enough for knocking your trap so you can never be too sure.

Set the tension of the tap’s switch accordingly and try not to put the trap near a place that your raccoon may destroy. Once a raccoon realizes it’s been bested, it may become pretty determined and try everything for escaping. It may even try to dig up the area around the trap so look for any electrical wires around the trap (getting the raccoon electrocuted isn’t the way to go).

Trapping raccoons indoors- is it possible?

If you think that trapping raccoons on your property is easy, it means you never had to deal with a raccoon inside your house.

On the off chance you’re in the same room with the infamous bandit, never try corner it. Its looks are deceiving and even the friendliest raccoon is going to scratch and bite when its life is as stake. It may not honor you, but seeking assistance from an expert is going to be the wisest solution.

When you’re suspecting that a raccoon is somewhere in your house or has managed somehow to get into your home, trapping it as usual may work. You want to keep your pets in some safe zones, as you want to protect them from any possible accidents. If you’re positively sure that the raccoon is somewhere in your home, using some ammonia or various strong scents is going to make it come out of its hiding place. If you think that the raccoon typically hides in your home but it’s outside your home at the moment, do your best and seal all openings that the animal may use (think like a raccoon J).

So you got the raccoon. Now what?

Some of you are going to want to release the raccoon back into the wild.

Nevertheless, before relocating raccoons, it’s wise to talk to animal control, making sure that there are no laws regulating the transportation of raccoon. You may even find out which are the best areas to release the raccoon.

A kill trap that snaps the animal’s neck is going to work if you want to use the fur later on. If you’re only interested in meat or you want to get rid of the animal, you should use a single shot to the head.

Try not to use a pellet gun as you’re only going to injure the animal and not kill it. Don’t use a shotgun or any other weapon using ammunition as you can scatter the entrails.

No matter which way you choose, checking into local regulation before taking any severe measure is fundamental. Even if the animal was damaging your property, there may still be some regulations prohibiting the killing.

When none of the above doesn’t sound appealing to you, it’s better to get in touch with animal control as they’re perfectly capable to remove it from your property.

How to keep raccoons away from your property?

The impressive sense of smell and their powerful “love” for food makes raccoons determined scavengers.

When to call a professional?

It’s ok to feel overwhelmed by the whole raccoon situation and call an expert for help. Sometimes, raccoons can get pretty aggressive or even carry disease. You should call a private animal removal company or contact your local animal control office.

When there’s more than one or two of them on your property, calling a professional is the wisest thing to do, even if you feel that you’re up for the task.

When you’re doing it right, trapping a raccoon shouldn’t be very difficult. However, enlisting the help of a professional is the better solution in some situations. Unless your raccoon is highly aggressive, you should be able to trap it in less than 24 hours. Placing the trap in the right location with the right kind of bait is going to do most of the work.

Further reading: How to Get Rid of Raccoons at Deer Feeder Stations

What You Need To Know To Have The Best Longboard Setup

What You Need To Know Before Going On A Snipe Hunt? – A Complete Guide

Hunting Is Expanding – What’s In Your Kit Bag?