Hunting Laws and Regulations in Hawaii 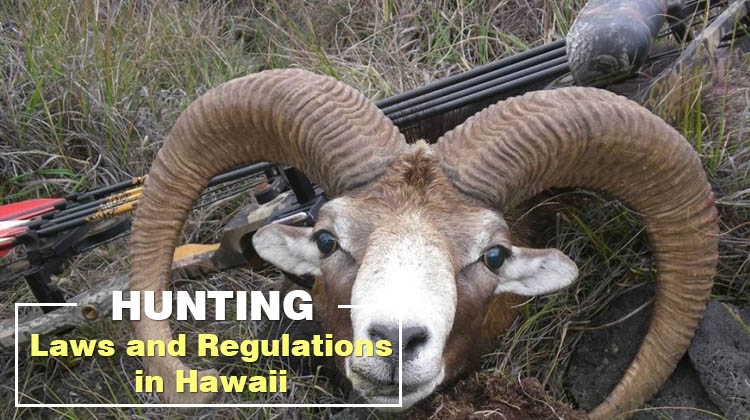 The chain of islands placed in the middle of the Pacific Ocean, Hawaii, provides a fantastic hunting experience that you cannot experience in a different state.

If you’re a non-resident and bring to any of the islands a weapon, you have 48hours for registering it. There are specific hunting laws in Hawaii, and every island has the specific wildlife and division of forestry.

We should begin by highlighting that some game animals can only be hunted by lottery, so make sure you get in touch with the division of forestry and wildlife for details.

How many types of hunting licenses are available in Hawaii?

Any hunter must carry an available Hawaii hunting license while hunting. You also need one when carrying or transporting bagged game.

In order to obtain a Hawaii hunting license, you may present evidence of completing a hunter safety course that was recognized by the National Hunter’s Association.

Anyone living in Hawaii for a minimum of one year can get a resident hunting license. People working in the active military are seen as residents.

As a resident, you cannot do without the Hawaii Wildlife Conservation Stamp. You may also need more stamps, permits, or tags in some situations.

Any Hawaii resident and non-resident planning to hunt that is  15 or younger must achieve a hunting license. Also, they need to go together with a licensed adult that isn’t hunting. Several tags, stamps, permits may be necessary.

A free hunting license is available for Hawaii residents 65 and up. For a smaller fee, the non-residents’ age 65 and older can also get a reduced-fee hunting license. Stamps, permits, and tags are needed in certain situations.

A person dealing with a disability may qualify for requesting the  special hunting accommodations.

A resident hunting license is available for anyone active personnel working in the military and stationed in Hawaii. In the State of Hawaii, there is no hunting license only for the veterans.

Hunting licenses are valid from the date you bought them until the 30th of June of the following year.

What are the hunting rules in Hawaii?

There are a lot of rules and regulations that any hunter has to follow when hunting in Hawaii. Check

Here are some rules to know:

What are the restrictions in terms of hunting license?

Here are some rules regarding the hunting licenses, tags, permits, and check stations:

The following conditions and restrictions will apply, concerning weapons:

There are multiple conditions and restrictions when hunting with dogs, but here are the most important ones:

What are the rules on aircraft and motorized vehicles?

If you plan to use motorized vehicles or aircraft, you will have to abide by several conditions and restrictions:

Other rules and regulations

When it comes to safety, close areas, or general hunting, some new laws have to be followed in Hawaii:

Here are some general limitations when hunting in Hawaii:

If you’re carrying a backpack or game, the blaze orange on the upper part of your torso has to be easy to notice from front and back.

When hunting in Hawaii, only some mammalian game species are legal to take:

Every island has its own set of rules, but here are some from the island of Hawaii:

What is forbidden within the public hunting zone?

The next actions are forbidden within a public hunting zone: