Hunting Laws and Regulations in Florida 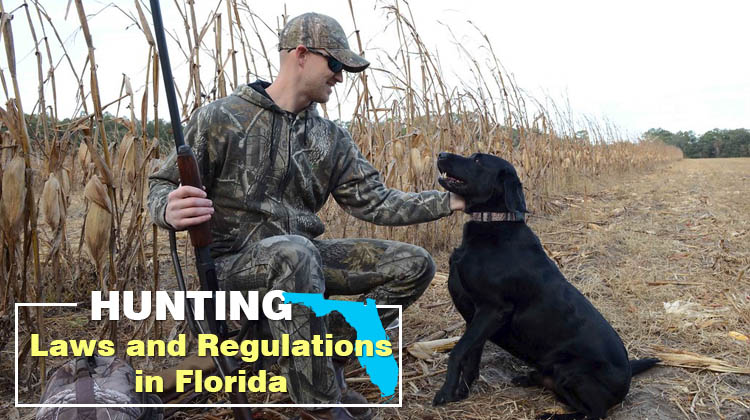 When it crosses your mind that hunting could be a hobby for you, one of the very first things to do is to take a look at the rules, regulations, and permits you’re going to need to obtain.

How many kinds of hunting licenses are in Florida?

Scroll down for finding out the main categories of hunting licenses in the state of Florida:

Anyone declaring that Florida has been their state of residence or owns a Florida driver license or ID card qualifies as Florida resident. The active-duty people working in the military and stationed in Florida, along with their dependents, qualify as residents.

Anyone from 16 to 64 must possess a resident hunting license for hunting. For some game species, you may need to achieve other permits.

A non-resident aged 16 and up must own a non-resident hunting license and additional permits for some other game species.

Any person 15 and under, resident or non-resident, can hunt without a hunting license.

Florida residents 65 and up can hunt without owning a hunting license.

It’s possible for Florida residents with certified disability to solicit the free Resident Person with Disabilities Hunting and Fishing License.

An active-duty military professional that is stationed in Florida is legal to ask for a resident hunting license. Should he/she be stationed elsewhere and is on leave, but is a Florida resident, doesn’t need to achieve a hunting license, as long as the military leave is longer than 30 days.

License expiration: Hunting licenses are good for 12 months from the purchase date or from an alternate starting date. Florida residents have the chance of buying a lifetime hunting license.

Does everybody need to get hunter education in Florida?

Any hunter 16 and up and born on or after June 1, 1975 cannot hunt without completing the hunter education certification. Don’t skip taking the course of education that The Florida Fish and Wildlife Conservation Commission and IHEA-USA has certified.

What is Florida Field Day?

After you’ve taken the online section of the Florida Fish and Wildlife Conservation Commission Hunting Education course, you must solicit the mandatory Field Day.

Just because you completed the online course doesn’t mean you will have a spot at the Field Day. The Field Day can take 4-6 hours and includes:

The majority of topics related to regulations in the state of Florida and some of them will not be covered in the online course. You have to wear the appropriate clothing for the outdoor session, nevertheless.

You will receive your Hunter Education Certification only after participating and passing the Field Day section.

Is it mandatory to wear hunter orange in Florida?

It’s not legal to hunt deer or accompany a hunter on public land unless you’re wearing at least 500 sq in of daylight fluorescent-orange material as an outer garment. You have to wear the clothing above the waistline and also to wear a head covering.

However, it’s not mandatory to wear hunter orange during the archery-only season or when hunting on private property.

What are the general rules when hunting in Florida?

There are many rules for hunting different species, but some are general and apply at all times. Keep reading to find one some of the general rules:

It’s not legal to use dogs for taking a turkey. Dogs have to wear collars that display the owner’s name and address. Dog hunters should also have the written permission from the landowner before pursuing game, furbearers, and wild hogs on private land.

What other general rules you need to consider?

The list of rules and regulations when hunting in Florida doesn’t stop here, so don’t stop reading:

It’s not legal to take the game on lands or water upon which grain, wheat, corn, food, or anything else has been placed for purposes unrelated to ordinary agricultural harvesting or planting.

You could hunt non-migratory game almost year-round near game-feeding stations on private lands if the feeding station has been kept with feed for six months prior hunting.

It’s unlawful to take wild turkey when the distance from the game feeding station is smaller than 100yards (the feed is present).

It’s unlawful to put, offer, or let the placement of feed/garbage so that it attracts a bear. It’s prohibited to feed the bears intentionally.

It’s not legal to sell nor buy the game. Game that was produced on licensed game farms and was recognized and handheld legally makes an exception. For the lawfully taken game, the skins or the feathers of game birds, and also the skins of rabbits, squirrels, or deer are legal to sell.

You must register the harvest in the harvest log and fill in the FWC’s harvest reporting system after harvesting deer and not after removing it from taking place. You have to do it in 24 hours from harvest and before processing the deer or moving any parts of it to the meat processor or taxidermist.

Even though it’s legal to dismember deer and turkey in the area or camp, you still have to leave the tag attached to every portion. The tag has to include the name, address, the customer number issued for the hunter, and date and location of harvest. The tags must be available to recognize the part of the animal carrying sex identification, head, and beard (when applicable).

It’s mandatory not to remove the positive evidence of sex identification. Head with any antler or antlers are considered such evidence.

You are allowed to transport the possession limit of the game that you took legally. You can also mount specimens of lawfully taken game, feet, feathers, heads, hides/skins, and antlers, including.

If you’re shipping the legally take the game, you must mark every package on the outside, displaying the names and addresses of yourself and the addressee. You must also note the numbers and sorts of games packed.

All off-highway motorcycles (OHMs) and all-terrain vehicles purchased after July 1, 2002 must be titled with the Department of Highways Safety and Motor Vehicles. Should you use the ATV or OHM on lands for public use or private, you must title the vehicles.

What general aspects to consider when hunting deer in Florida?

When it’s another season, it’s legal to take just one antlered deer.

The possession limit is four deer, whereas the annual bag limit is five deer, of which you can only have two antlerless.

Here’s how to legally take deer:

What about hunting turkey?

Here’s a thing or two about hunting turkey in Florida-

What are the bag limits for gray squirrel, quail, otter, and more?

You can use bows, crossbows, shotguns, muzzleloaders, airguns, and pistols. Taking gray squirrel and quail during crossbow, archery, and muzzleloading gun season is legal as long as you’re using the appropriate methods of taking.

During the archery season, you can only use bows for taking the game, whereas, during crossbow season, it’s legal to use both bows and crossbows.

Methods of take&more when hunting furbearers in Florida

You can take furbearers with guns (air guns including), snares (power snares as well), live traps, and recorded game calls. You must check the snares and live traps every 24 hours.

You can hunt opossums and raccoons at night, but only if using .22-caliber rimfire firearms and single-shot  .410-gauge shotguns.

It’s not legal to use dog-proof raccoon traps, steel-hold traps, and body-grip traps unless FWC allows you to. Transporting wild-trapped live raccoons within, into or from the state is illegal. Only when you have authorization from the FWC it’s legal to transport. It’s also prohibited to hunt raccoons and opossums by using lights from vessels or moving vehicles.

It’s not legal to place feed or garbage in a way that attracts coyotes, foxes, and raccoons.

What are the unlawful methods and means when hunting waterfowl in Florida?

Apart from the bag limits and permits you need for hunting waterfowl in Florida, here are the means and methods considered to be illegal in the state of Florida:

You must own a migratory bird permit and hunting license for hunting waterfowls. You cannot hunt waterfowl without the Florida waterfowl permit and the federal duck stamp. You can shoot thirty minutes before sunrise until sunset unless there are no other specifications.

It’s prohibited to take or even try to take brant, harlequin ducks, and purple gallinules.

The hunting laws in Florida allow youth 15years old and younger to hunt light geese, ducks, coots, mergansers, Canada geese, and regular moorhens. It’s only legal when they go together with  a non-hunting adult of 18 years and up.