Hunting Laws and Regulations in Colorado 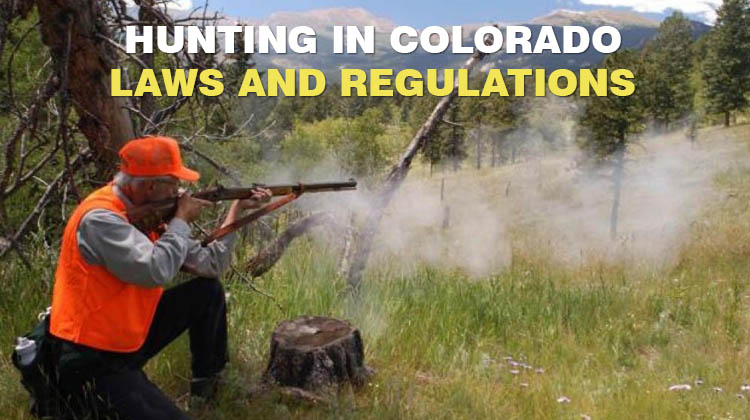 When you live in Colorado and plan to start hunting, you need to get all the info you need about the hunting license.

You should start by selecting the appropriate license type and fill it in the Colorado hunter certificate specifications. Your age depends a lot, and the Hunter Education Certificate mandatory for legally purchasing a permit or hunting license.

How many types of Colorado Hunting Licenses are there?

Here are the kinds of licenses for hunting in Colorado:

You have to live for at least six months to qualify as a resident in Colorado. Non-resident full-time students living in Colorado and going to an educational institution in Colorado, along with active-duty military members, qualify as residents.

Every Colorado resident must acquire a resident hunting license, but some additional permits and licenses will be necessary as well. Any resident asking for hunting license has to buy the Habitat Stamp first (aged 18 to 64). A stamp will do for a one-year license.

It’s mandatory for non-residents to possess a non-resident hunting license. In some situations, more licenses and permits will be asked.

Just like in the case of resident hunters, non-residents hunters also need to buy the Habitat Stamp before asking for a hunting license. One stamp is enough for a license year.

There is no hunting license mainly addressed to senior citizens.

Colorado residents dealing mobility impairments are permitted to require a Mobility-Impaired Hunting License. The Colorado Parks and Wildlife website will give you all the details on procedures.

A resident veteran that deals with service-connected disability (at least 60%) can apply for small lifetime game and fishing combo permit.

What are the rules on wearing hunt orange?

The list of mandatory equipment doesn’t stop here, and hunters must also wear fluorescent pink or orange hats. Anything covering the head should be easy to spot in any direction. The rules apply to muzzleloader hunters and archery hunters during rifle season, as well.

Throughout the limited bear season, hunters don’t need to wear fluorescent pink or orange when archery hunting a deer, elk, bear, pronghorn or moose. It’s the same for hunters licensed for private land hunting on Ranching for wildlife programs. However, it’s recommended for them to wear it, for safety reasons.

The raffle/auction license hunters aren’t required to wear pink or orange when using archery equipment for hunting when the rifle season isn’t open.

Any hunter using a pop-up blind or ground blind should wear pink or orange that is easy to observe from any direction on the outer of the blind. Camouflage or pink don’t make as legal options. Moreover, mesh garments aren’t reliable for hunting.

According to CPW, you should wear daylight fluorescent orange or pink when out in the field even if you’re not hunting. It’s for your safety since animals sense your smell and sound, and not the colors that they don’t see.

What are the hunting requirements for migratory waterfowl? 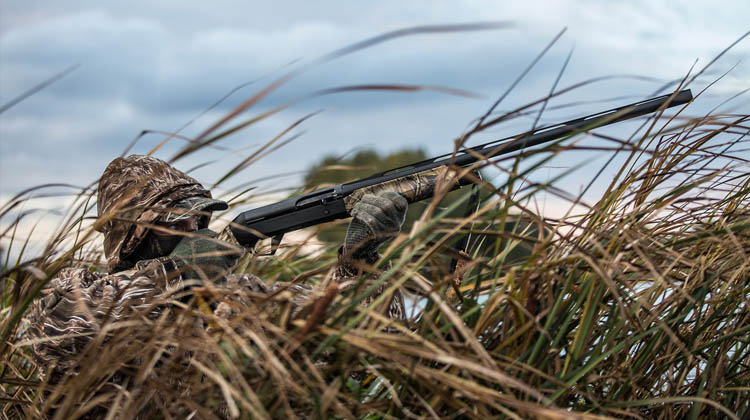 The Colorado Waterfowl Stamp and the Federal Duck Stamp are required if hunting migratory waterfowl. Plus, the hunters must present proof that they took the Harvest Information Program (HIP).

The hunting license for small game is valid begging with April 1 until March 31 of the next year, as for the hunting licenses for the big game, they will expire the same date as printed on the permit, the following year.

Is hunting big game appealing to you? Here’s what you should know!

In the case of hunting big game, you should take a look at the hunting equipment you can use:

In the case of semi-automatic, you cannot use anything holding more than six rounds in the magazine and the chamber.

You must use expanding bullets weighing 70 grains for deer, bear, and pronghorn (minimal), 85 grains for moose and elk.

It’s unlawful to use centerfire rifle larger than .23 caliber on hunting small-game mammals and game birds or furbearers.

You may use legal muzzleloaders in muzzleloading season, and in-line muzzleloaders as well. It has to be a single barrel firing just one round ball or a cone-shaped projectile. If you’re hunting bear, deer, and pronghorn, the conical bullet has to be .40caliber (minimal), whereas the caliber of the round-ball bullet should be at least .50. The conical bullets must have a minimal .50 caliber when hunting elk and moose, at least .50 caliber, whereas the round-ball shots should be at least .54 caliber. The minimal weight for shells is 170 grains.

If you want to use bullets higher than .50 caliber, their weight should be at least 210 grains.

It’s legal to use fiber optics and fluorescent pain into or open on iron sights. However, it’s not authorized to use sighting devices and scopes with batteries or light, sabots including. We should highlight that cloth patches aren’t defined as sabots.

It’s not legal to attach electronic or devices with batteries to your muzzleloader.

The shotguns should be more significant than 20-gauge and fire just one slug. You cannot use buckshot for the big game.

The barrel cannot be shorter than 18in, but not longer than 26in.

They are legal, but the string shouldn’t be drawn mechanically nor held mechanically. You can use series and mechanical releases when you’re hand-drawing or hand-holding, as long as you’re not using other connections or attachments to the bow.

Hunters using hand-held bows (compound bows too) have to use arrows with 7/8in outside diameter for the broad head. There shouldn’t be less than two steel cutting edges. Each cutting edge has to be in the same plane for the entire the cutting surface’s length.

During archery season, you can only use hand-held bows, with 35 pounds minimal draw weight, and 80% let-off maximum.

It’s not legal to use bows that propel more than just one arrow at a time. You’re not supposed to use mechanisms for loading arrows automatically, either.

It’s also unlawful to attach or incorporate scopes and battery-powered electronic devices to the bow or arrow. The lighted nocks on indicators make an exception.

It’s legal to make use of recording devices (camera or video recorders) and attach them to the bows, but only when they  don’t throw light toward your game and don’t improve your finding, sighting, or shooting, nor range finding.

It’s not legal to use pneumatic and hydraulic technology for storing energy when shooting arrows, and so are the explosive arrows.

One hundred twenty-five pounds is the minimum draw weight for crossbows, whereas the minimal draw length should be 14in. You have to use a positive mechanical safety device.

The bolts have to be longer than 16in, whereas the broadhead should be more significant than 7/8-in full, with at least two steel cutting edges. Each cutting edge has to be placed in the same plane for the entire cutting surface’s length.

During the archery seasons, crossbows are prohibited.

The barrel has to be longer than 4in, whereas the caliber has to be bigger than .24 in diameter expanding bullet. It’s illegal to use attachments or shoulder stocks.

It’s mandatory that you use a cartridge/load with 550ft-pounds minimal energy at 50 yards, according to the manufacturer’s specs.

What are the rules on licenses, tags, and more?

In the state of Colorado, you can only fill in one application in the drawing per species, per license year.

Here are some more rules to know about:

Anyone hunting bull moose should know that the lifetime bag limit is one. The raffle, auction, and individual management licenses make an exception.

A small-game license is needed for hunting coyote when you have unfilled big-game permission. It’s legal to hunt big-game even if you’re harvesting coyote.

You must put a carcass tag to your game. You have to fill in the date, the name, the card, and detach it from the license right after the kill. You have to put the tag to the carcass right before or during transportation, no matter the type of vehicle you’re using. It’s illegal to remove the card before processing the meat or before consumption.

It’s not legal to tear nor sign the prior tag killing. If you lose or destroy the tag by accident, you must obtain a duplicate from the CPW office before hunting. You also have to prove the detachment, loss, or destruction have been unexpected.

Keep in mind that it’s unlawful to remove a part of a license, but the carcass tag makes an exception. Otherwise, you will void the permit and must purchase a duplicate. Anyone owning a non-resident big game/fishing combo license should know that the fishing license is right after the carcass tag is removed, while the rest of the permit is flawless.

In the case of game-meat donations, the donation certificates are mandatory. Documents should display name, address, and telephone number for recipient and donor as well, but also the donor’s hunting license number. The amounts and species donated, the date of the kill, and the donor’s signature are also mandatory. The certificate should be attached until the meat is consumed entirely.

Here are some rules when it comes to donating:

It’s unlawful to transport or own a big game carcass with no proof of sex naturally attached. It’s not legal to detach proof of sex that goes with the body. You have to leave evidence of sex on the carcass when you’re submitting deer or elk head to CWD testing.

What are the illegal activities when hunting in Colorado?

You may risk lifetime license suspension when convicted of any of the following felony violations:

It’s mandatory that you remove humanmade blinds and stands ten days after the season has ended. You also have to make the owner’s Customer Identification (CID) number, and the dates visible on the outside of the blinds or tree stands.

By bait, we refer to displaying, exposing, sharing, or scattering  minerals, salt, animal parts, grain, and various food attracting big game. Mineral blocks and salt that are typically used for agriculture aren’t defined as bait. However, scent sticks that smell like food aren’t legal to use when hunting bears.