Hunting Laws and Regulations in California 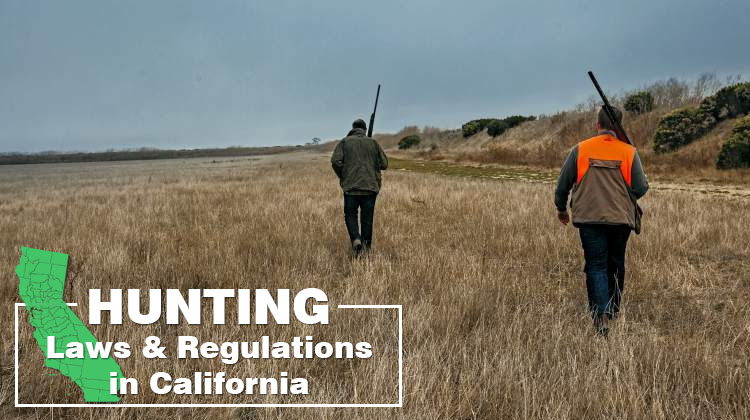 Who’s able to obtain a hunting license in California?

There are several types of licenses to obtain in the state of California, so here’s what you need to know:

A person living in California for at least six months is defined as a resident. Residents are considered to be the active-duty military members as well.

If you’re a California resident and plan on hunting, you must obtain a resident hunting license. Hunter pursuing big game need to get more tag licenses. Take a break to access the California Department of Fish and Wildlife website for more details.

The non-residents must own non-resident hunting licenses. Should they go after the big game, they also require additional tag licenses. Some restrictions may apply, so look into it.

The Junior Hunting License is mandatory for both residents and non-residents under the age of 18 wanting to hunt mammals and birds. Hunters younger than 12 need additional tag licenses for hunting big game.

In the state of California, there are no hunting licenses, specifically addressing senior citizens.

It’s possible for active-duty military members to buy resident hunting license. Any recovering service member that is under medical treatment for serious illness or injury can apply for Recovering Service Member Hunting License.

Any disabled veteran (both California residents and non-residents) that have 50% or higher disability and have been honorably discharged can ask for Disabled Veteran Reduced Fee Hunting License.

Disabled hunters can ask for Disabled Archer Permit too.

Side note: It’s only from July 1 through June 30 of the next year when the hunting licenses are good for use. Any California resident has the possibility of buy a lifetime hunting license.

What are the rules on hunter orange in California?

No law in California requires you hunter or blaze orange when hunting in California. However, the DFW suggests that all hunters should wear hunter orange clothing that is easy to notice from every side when hunting upland bird. It’s the same for hunting big game.

How many rules are for hunting big game?

We should start by highlighting that it’s illegal to use rifles and pistols for taking any mammal or bird in Picacho and Providence Mountains State Recreation Areas.

Deer, elk, wild pig, pronghorn antelope, and Nelson bighorn sheep are defined as big game. You need to check the terms on the forked-horn buck, antlerless deer, and either-sex deer.

Here are some of the rules on hunting big game in California:

When hunting deer, it’s not only the valid California hunting license that you need, as deer tags are also necessary. You must have it on you when hunting deer.

In the state of California, you may obtain two deer tags per license year. A hunter requesting for deer tag cannot be younger than 12 before July 1 of the license year for which they’re asking. Should they apply after July 1, they have to be already 12.

The Fish and Game Commission is allowed to revoke the hunting rights of anyone convicted of three violations of the state’s hunting laws or regulations over five years.

There are hunt tags for various zones, so make sure you go to https://www.wildlife.ca.gov/Hunting for more details. There are hunting zones only for archery, military lands hunt, and apprentice hunt tags.

Archers that don’t possess and archery the only tag can hunt only in the zone, areas, or zones for which they own a general ticket or an area-specific archery tag.

Apart from the exceptions stated in the regulations (go to http://www.eregulations.com/california/hunting/mammal/archery-deer-hunting/ for more details), crossbows cannot be used during the archery season nor throughout the general season when using an archery-only tag.

Is hunting bear in California interesting for you?

Anyone hunting bear in California, no matter if resident or non-resident, should be at least 12 years old and own both a valid hunting license and a bear tag. CDFW license sales office, online, license agent, or by telephone sales is where you should look to buy bear tags. Hunters aren’t allowed to get more than one bear tag per hunting license year.

No hunter should own more than one bear per hunting license year.

Here are some regulations when hunting bear:

What are the rules for hunting bobcat in California?

Here are some of the many rules to follow when hunting bobcat in California:

What are the regulations on elk, pronghorn & bighorn sheep hunting?

Applicants must pay $8.13 processing fee for the application and the fee isn’t refundable.

When it comes to restriction, you should know that applicants must be 12 years and up before July 1 and also own a valid California hunting license. Non-residents can be drawn for elk/pronghorn tags every year. In the case of an apprentice, they need to hold a valid California junior hunting license. If drawn, the junior hunters must go together with a licensed adult chaperone when hunting. The latter shouldn’t be younger than 18.

As for bighorn sheep hunting, the applicants should be 16 and up before July 1 of license year and own a proper California hunting license. There cannot be more than 10% of the Bighorn sheep tags provided for the non-residents every season year.

It’s not legal to apply as a party in the case of the Bighorn sheep tag. Funny enough, but anyone successful with the draw application and recipients of fund-raising tickets need to take the hunter orientation requirement.

A maximum of two residents are able to request as a party, whereas non-residents cannot use as a party for pronghorn or elk tags.

Is it legal to hunt wild pigs in California?

You’re lucky if you plan on hunting wild pigs in California as the general season is open all year. On top of everything else, there is no such thing as daily big or possession limit for wild pigs in the State of California, so hunt all you want!

What are the rules for the small resident game?

When it comes to bag and possession limit for tree squirrel, it’s four squirrels per day and four in possession.

During the general rabbit and hare season, it’s legal to hunt a brush, cottontail, and pigmy rabbit and some hare with raptors. You can take five per day and have 10 in possession. Pay attention to the areas where it’s forbidden to take brush and cottontail.

For Jackrabbits, white and black-tailed, the general is open statewide all year, and there is no bag and possession limit.

In the case of resident small game mammals, thirty minutes before sunrise to one-half hour after sunset are the legal shooting hours.

What are the requirements for migratory waterfowl?

Any hunter 16 and up should buy the Federal Duck Stamp if hunting migratory waterfowl. The California Duck Validation is needed for anyone planning to take a bird.

Hunters that own a Junior Hunting License make an exception. Moreover, hunters must possess proof of them completing the Harvest Information Program (HIP).

Here’s what unlawful when bird hunting in California:

Instead of a conclusion

Hunting in California can be rewarding and fun, but you should never do it unless you’re playing by the book.