The 6+ Essential Types of Gun Holsters

If you’re using a gun, you know that you need to consider all sorts of pieces of equipment too. Some of the accessories you need for your weapon protect both you and the gun, and the gun holster is one of them to mention.

What is a gun holster? What does it do?

No gun is something to play with, and you should holster it correctly so that it keeps you and people around you at all times. The gun holster should also ensure you easy access to the gun.

There are three main things that a gun holster is supposed to do:

Apart from the first jobs that a gun holder has to do, some other features make the difference between good and inferior models. Here’s what abilities a good gun holster may provide:

You should know the best which features count for you the most. When absolute concealment is fundamental, go with a holster that provides more difficult access than the regular belt holster, but doesn’t show at all. It’s the tradeoffs you need to consider just like with everything else in life.

There are many types of gun holders, and you should go over the details for each of them. The more you know about it, the easier it’s going to be to decide which kind of gun holsters fits your needs the best way.

Outside the waistband (OWB) 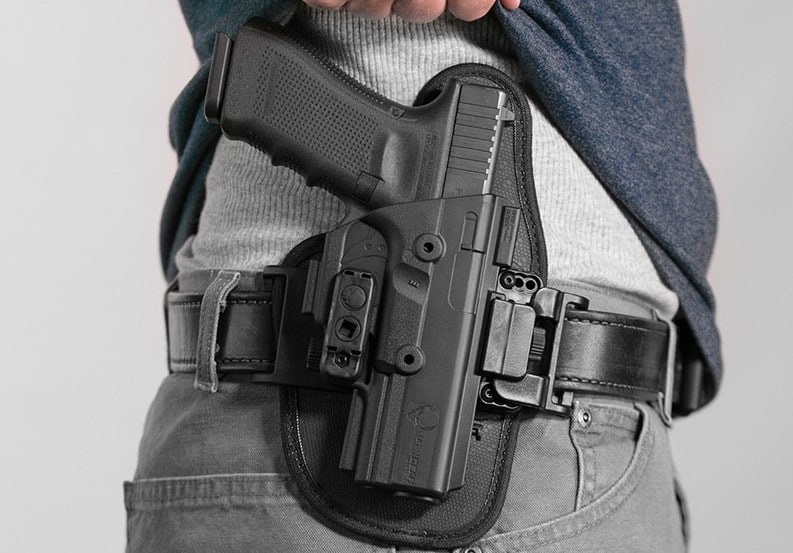 Do you remember cowboys in the movies? Well, the OWB holster is a model that you attach to your belt, with the entire system of gun and holster riding outside the pants (typically on the dominant hand side).

When the shooter likes to draw across the body, the OWB holster may ride on the opposite side.

There are various ways to attach the OWB holster to the pants, belt, or skirt, with most featuring loops through which you thread the belt.

However, most OWB holsters come with tiny “nubs” that catch on the bottom side of the belt, keeping the holster in place when you’re drawing.

Let’s see the benefits of the OWB holsters:

Inside the waistband (IWB)

The name is a tail teller, so the IWB holsters go between the pants and the body. It can be behind, in front of the hip bone, or right on the bone. The appendix-carry holsters are also within the category since they ride upfront and not on the side.

Kydex and leather are the most common materials used for IWB holsters. The hybrid-style holsters feature a great leather back panel for stability and comfort, whereas the gun pocket is made of Kydex so that the gun stays in place.

There are some pet peeves related to the IWB holsters as well: 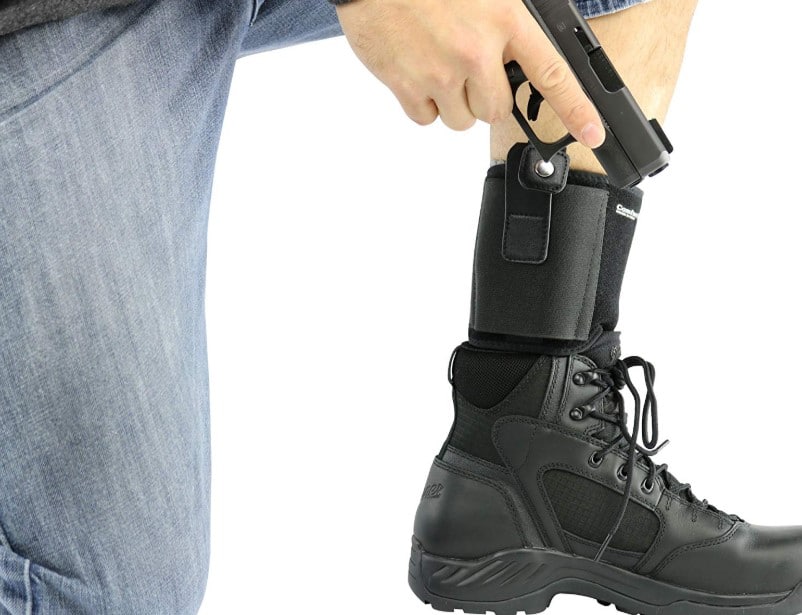 When you have a small weapon (compact semi-automatic pistols, for instance), an ankle holster is a great option to have in mind. It typically comes with a neoprene/padded elastic strap and an attached holster pocket.

You wrap the band around the ankle, carrying the gun inside the support side leg.

We like ankle holsters for a couple of reasons:

There’s no such thing as the perfect gun holster, and the ankle holster doesn’t make an exception. The shortcomings aren’t many, though: 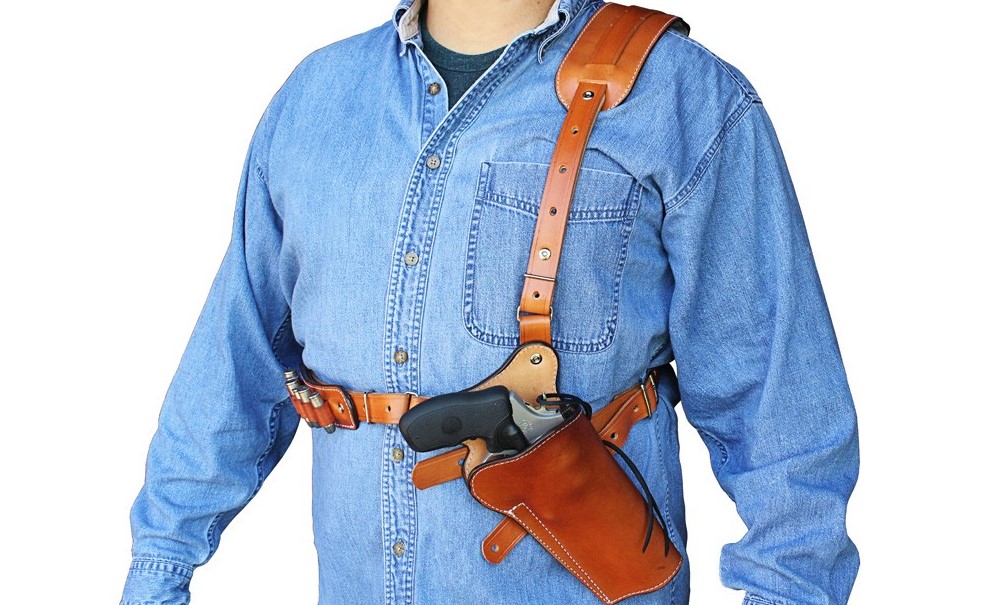 You may have seen it in the movies too (Miami Vice is one to name), and the shoulder holster consists of a set of leather straps, crossing over the shoulders and back. The gun holster and the spare magazine are going to hand on the opposite side of your body.

With the straps over the shoulders meeting in the back, this type of holster lets you hide the gun with your jacket or a sports coat.

What are the positive aspects of shoulder holsters? Here’s our list:

The cons aren’t significant, but you may want to check them as well: 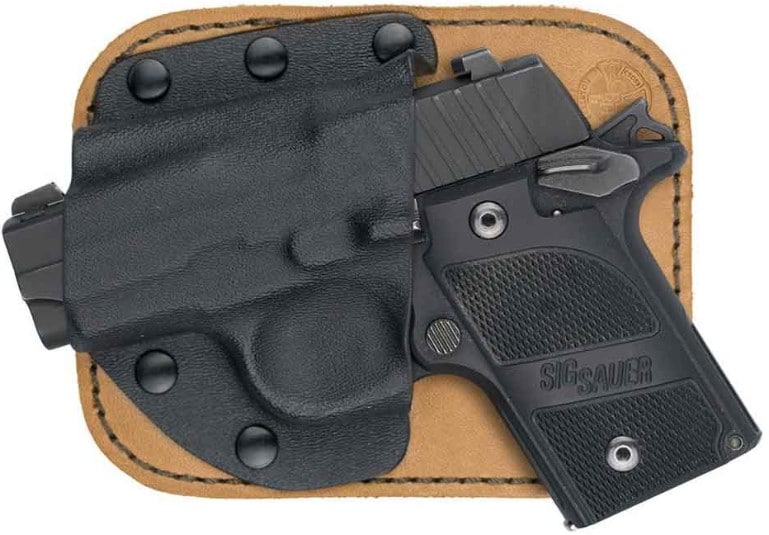 Ultra-compact revolvers and pistols are very common nowadays, so pocket holsters are a popular choice too. Pocket means mostly the front pocket, but some models can work with a jacket pocket as well.

The nitpicks are essential to check too: 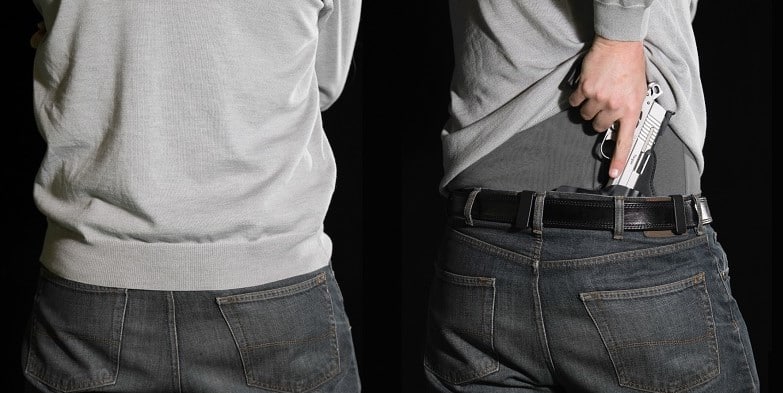 More and more Americans are arming themselves, which is why holster companies developed the clothing holsters. You can now shop for compression shorts and undershirts that come with holster pockets.

There are also vests and jackets with concealed-carry gun and magazine pockets ready out of the box. Women can go with holsters attaching to brassieres, whereas some can buy pants that break away holster pockets.

Here are the functional aspects of this type of holsters:

Don’t forget to take a look at the cons: 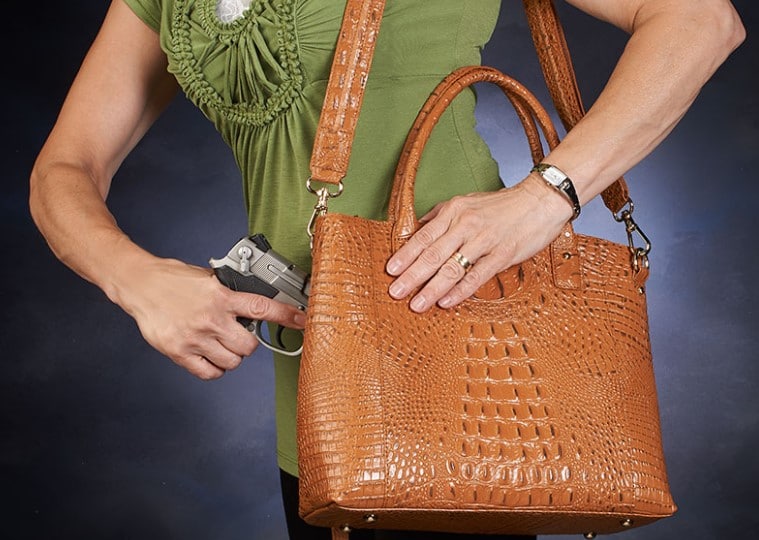 It’s not unusual for women to use the purse holsters. With their wardrobe being so diverse, it’s difficult for them to have an IWB holster that isn’t versatile. They always carry purses, though, which is why the purse holsters are winning more fans as we speak.

However, you should get a model with a designated holster pocket. You don’t want to carry the gun in the main compartment when it’s almost impossible to find (yes, it happens).

The most significant benefit when using a purse/bag holster is the functionality, with one carrying the bag/purse all the time. You no longer worry about putting on a special brassier or undershirt.

As for the drawbacks, here are some:

Now that you know a thing or two about the most critical types of holsters, it’s easier for you to decide which works the best. However, we’ve only scratched the surface of the gun holster world, so stay put for more information.