Everything about Laws&Regulations on Hunting in Alaska 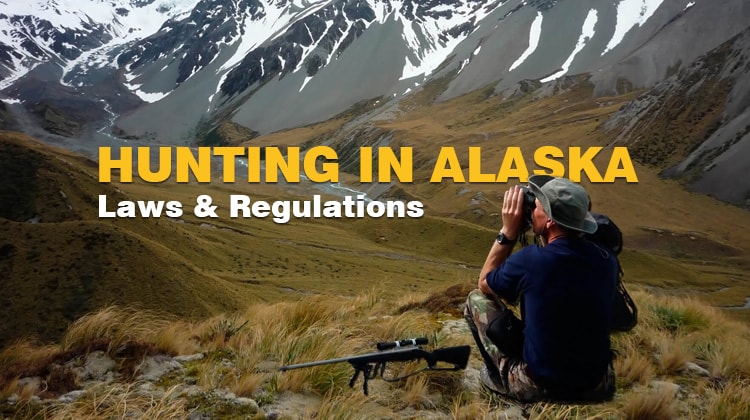 The Alaska Department of Fish and Game is the institution administering the hunting in Alaska, but it’s the Department’s board of Games that makes the regulations.

The large size of Alaska is the reason for which there are 26 Game Management Units (GMUs), and each of them has the authority to release the seasons according to different species of the big game.

The federal government has to manage hunting on specific federal public land on the cause of differences between federal and state laws. Regulations inside the Alaska Hunting Regulations are the most significant authority in terms of hunting on private lands and state lands.

At times, the federal regulations may be stricter than state regulations for the same areas.

What’s to say about Alaska’s hunting laws in a nutshell?

If you’re a hunter, it’s your responsibility to be familiar with the current year’s regulations. Regulations can suffer change from year to year, and you should check them every time a new season begins.

The Alaska hunting law is made for two various types of hunting seasons:

The standard rules contain the purchase of hunting permit, agreement to the limits on bag limits and the season, and also the buying of harvest tickets and tags.

You can find general season permits at sporting goods stores, or check the ADF&G offices.

The Board of Game regulates the permit hunts for controlling the effect of hunting season on the game population. Therefore, it’s very strict about the number of hunters.

The Alaska Hunting Regulations handbook is released every June, and it includes all the information you need regarding registration hunts, general season, and bag limits. It also gives you info on the type of tag that you have to have for taking the game. Non-residents and residents can also find in the open hunts.

What should you know about general season hunts?

Anyone interested in general hunt has to know that you the hunt will be open to an endless number of hunters. Therefore, you should buy a harvest ticket.

You can find harvest tickets for free in places where you buy hunting licenses. Any non-resident should have a big game tag for the species he/she is planning to hunt. Keep in mind that you may not be able to find licenses for remote rural areas. The risk of selling harvest tickets is also high.

All in all, you need to buy game tags and license and harvest tickets before going out from the population center or home.

Do you need a registration permit hunt?

It’s possible that hunter demand and accessible animals to lead in overharvest of some species and/or increased density of hunters. Therefore, managers can release registration permits.

Don’t wait and check the area biologist about the rules and hunt conditions of the permit before you plan a registration hunt.

The Alaska Department of Fish and Game can release drawing permits in situations when the population of animals is small or if the number of the hunter is too high for allowing general season or registration hunt.

You can get a Drawing Permit Hunt Supplement online, but also at local license vendors and at ADF&G offices in late October every year. You can only apply for one between November 1 and December 15. It will be February when the results are released, and everyone applying gets notifications by mail. You can also find the results on ADF&G’s website.

You will find all of the drawing hunts (by number) for the big game species in the Supplement. Both resident and non-resident hunters may get a drawing to permit hunts. You can register no more than three various hunt numbers per species on every separate and party application.

For moose, you may submit a maximum of 6 various hunt numbers, whereas, for bulls, you can only do 3 to 6. You need to pay a fee for every different hunt.

Have you ever heard about Tier I and II subsistence Permit Hunts?

It’s only residents who can obtain Tier I and II subsistence permits. These permits are released when the game isn’t sufficing for the general season.

It’s rather complicated to make an application for Tier I and II hunts. The Tier I&II Supplement contains application dates, species, hunt dates, and hunting specifications.

Who emits the state hunting license?

You need to have the Hunter Education Certificate to be able to buy the permit/license to hunt, and you need to meet the Alaska hunter education certification requirements as well.

An Alaska resident aged from 18 to 59 must possess a resident hunting license. Stamps, additional tags, or permits may also be needed. Should you be older than 60, you need to acquire a permanent identification card.

Every non-resident must own a non-resident hunting license. Stamps, permits, and additional tags can be mandatory in some situations.

Anyone younger than 17 years don’t need a hunting license but must take and complete a hunter education course. They can also be under the close supervision of a licensed hunter.

Residents and non-residents for ten years or younger should own child crewmember licenses. They come at a discounted rate, though.

Alaska residents older than 60 can ask for a free senior identification card for trapping and hunting. They can use the ID number instead of the hunting license number. Nevertheless, they still have to buy the harvest cards and required permits.

Should you suffer from physical disabilities, you can check to see if you may benefit from special hunting services.Go see more infor at the Alaska Department of Fish and Game.

Anyone active-duty military member that is Alaska resident at the same time can use a free annual hunting license. A resident veteran with at least 50% service-related disability can access the free Disabled Veteran license.

Side note: All hunting licenses are usable from purchase date until December 31 of the current year. The resident trapping licenses make the exception, as they’re only valid through September 30 of the next calendar year. The fishing licenses for non-residents are also valid only for 1, 3, 7, or 14 days.

Does everybody need a Big Game Tag?

Should you plan to go after brown/grizzly bears or muskox, you need to get a big game tag. It’s the same for both non-resident military licensee, non-resident, or non-resident alien licensee.

When you cannot buy the tag you need, you may very well purchase another ticket at the same or higher price. It’s possible to use the label for the species you’re after.

What about the duck stamp?

Anyone hunting waterfowl should get a Duck Stamp. The residents younger than 18, and people with resident low-income license, resident disabled Veteran’s permission, and senior resident permit makes an exception.

All hunters younger than 16 must also purchase the Federal Duck Stamp when hunting migratory waterfowl. They should also have proof of enrolling and graduating from the Harvest Information Program (HIP). The season and region count, but the majority of hunters need to acquire a state duck stamp and waterfowl hunting permits.

In the event of losing/destroying your big game locking tag, commercial crewmember license, king salmon/duck stamp, you can obtain a duplicate for $5.

When and where is it legal to hunt in Alaska?

Should the animal population be, large enough and local subsistence is met, some species may be hunt all year long. In some regions, bears can only be hunt in fall or spring.

In the case of species (caribous and waterfowl), timing is essential. It’s because caribous migrate seasonally, whereas birds move rather fast away from Alaska.

With vegetation, weather, and topography being so various in Alaska, it’s obvious that we can only talk about some features by region and game management. You still need to look at  the current Alaska Hunting Regulations for details of certain seasons. It’s a good read of hundreds of pages, so brace yourself!

What is the harvest report?

Alaska wildlife managers rely on hunt reports, so hunters should report their harvest on the proper form.

The majority of general season hunts need to be reported on a “harvest report” postcard released together with the “harvest ticket.” Permit hunts are also announced on a form that ADF&G releases along with the permit.

You only have a day or two to announce a hunt in some situations, as the wildlife managers need to make sure that the harvest quotas aren’t surpassed. The Alaska Board of Game gives authority to ADF&G to provide penalties for hunters missing reports. Penalties may include loss of eligibility for permits next year. It can also lead to receiving citations by the Alaska Wildlife Troopers.

Can you transport and use firearms in Alaska?

If you’re planning to hunt in Alaska, make sure you also check the rules and regulations related to carrying firearms. Taking hunting rifles and shotguns through Canada isn’t complicated.

Hunters may own and use firearms in Alaska, but there are a couple of limitations. State laws forbid the following, and the exceptions are issued only by Federal permit:

You may legally hunt in Alaska with shotguns, rifles, and handguns. Should you hunt small game, it’s legal to use rimfire cartridges. Don’t also forget to give the Alaska Hunting Regulations a look.

The state law forbids you to shoot on/from or across a road. In order to stay safe, hunters aren’t allowed to shoot firearms when not away from roads.

It’s also possible for anyone older than 21 to carry a firearm concealed without a special permit. However, it’s illegal to own a gun at schoolyards, courthouses, bars, or domestic violence shelters.

If you’re carrying the firearm in a car, it has to be visible and concealed. It also has to be away from reach by anyone in the vehicle. For safety reasons, transported firearms have to be unloaded at all times.

Be aware that there are firearm restrictions in some state and national park units. Get in touch with Alaska Public Lands Information Centers for more details.

What is considered a hunting violation in Alaska?

The following are only some of the typical violations of Alaska’s regulations, so make sure you give them a good read:

Can you get refunds for stamps, licenses, or big game locking tags?

All refunds are analyzed in the Juneau Headquarters Licensing office. You need to offer a written explanation for the refund request, but also attach the original stamp, license, and tag that you render to be refunded. Any documentation that may help with the refund should be attached too.

You need to give 4-6 weeks for processing the request for a refund. When the application doesn’t meet the criteria (go online for more details), you will receive a denial letter, along with the genuine licensing items.