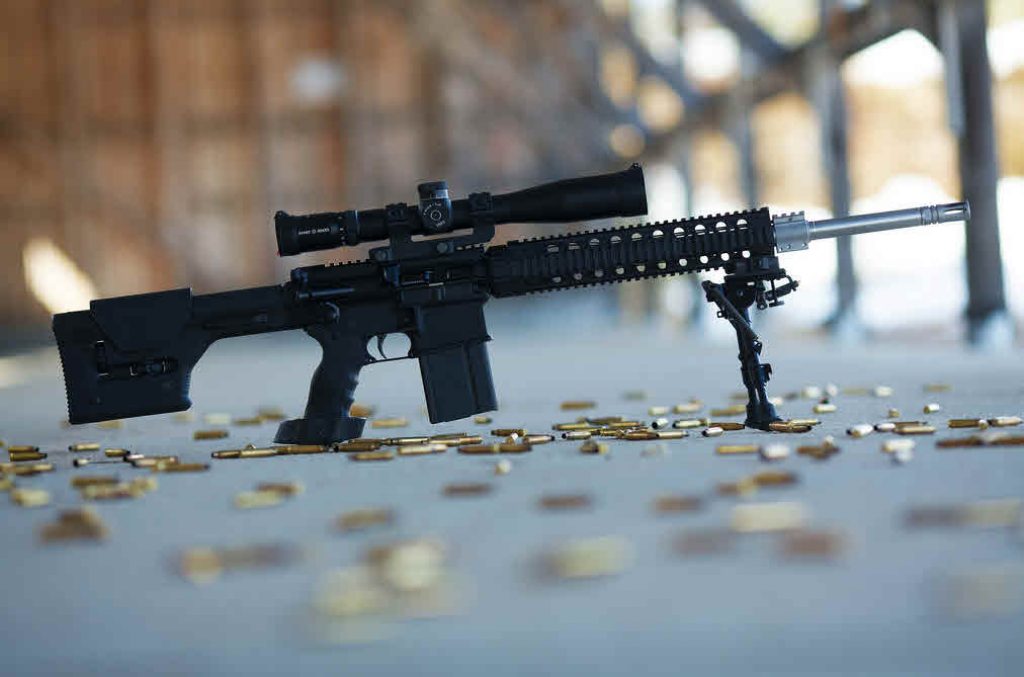 If you are a precision shooter you already know by now some things about rifle bipods. They are also known as shooting sticks and give stability, increasing precision when shooting at long distances.

The bipod for AR function as tactical accessory and used to be found only in the military and law enforcement area, as it kept away fatigue and gave accurate shooting at the same time.

The AR bipod allows the shooter to rest the firearm on uneven surfaces, preventing tiredness of the shooter and giving more chances to success of success. Most shooters use the AR bipods for stability when sitting as long as the range is set up with proper benches.

When to use a bipod

Apart from the military and tactical uses of the AR bipod, there are also some other situations where you may use it.

It’s a good thing to use the AR bipod when sighting in your rifle as this gives the best stability, minimizing the human errors when zeroing the scope. You may fine tune the windage and elevation on your scope so that you be more précised when shooting at a distance.

You need precision also when hunting as you do the same shot over and over again. Either you shoot from a prone position or you need to rest your rifle on some branches, a bipod might be the solution you need for your successful hunting.

Take a thought at the additional weight the standard bipod brings when you do your rifle setup. Some rifles have already scopes mounted and a shooting stick would only add more weight to overall weight. And this weight counts a lot especially when you go hiking or hunting for several hours/days.

Let’s not forget the fun part about using a bipod. You don’t get that tired when using one and you also get to group your rifle a lot tighter.

It’s not very important which kind of rifle you have (centerfire or rimfire), as a bipod may be mounted to your firearm.

How to install your AR bipod

It’s very easy to mount your bipod to your AR. The process shouldn’t take very long, no matter which type of AR or bipod you have.

Some bipods simply mount to the sling stud that most AR already have. If you don’t have a stud, you can get to a gunsmith so that you don’t take any chances when installing it. You don’t need to worry that you’re not going to use the existing sling stud because of the bipod. Most bipods let you attach the sling directly to the shooting stick.

You may also find bipods that need a small piece of rail to be attached to your stock for mounting. You may easily attach and detach the bipod from the stock thanks to the rail mounting. If it is mounted with only a stud, you need to manually unscrew it before you may detach it.

There are heavy duty and standard duty bipods. These types vary also by their specific features, like quick detach or thumbnut attachment methods.

A heavy duty AR bipod is 30% larger in size and may sustain a heavy weapon and hard recoiling calibers.

When you chose your AR bipod is important to take good consideration of the caliber/recoil of the weapon and the weight of the weapon.

Keep in mind that a lightweight rifle, shooting a large caliber recoils more than a heavy rifle shooting a lighter recoiling caliber.

A QD (quick detach) bipod is more expensive than a standard thumbnut bipod so you need to give a good thought before spending your money. The QD lets you reduce the weight of the firearm quickly when in need.

You also need to consider your shooting position before getting the AR bipod. When you shoot primarily off a bench or prone, using a large capacity detachable box magazine on your firearm, you need a taller bipod. If the magazine clearance is not essential, you still need to consider your own height when you get a tall or a short bipod.

As in all cases, your needs and likings have the final word and these are only some issues to consider when shopping.


For the entry-level shooter that hasn’t used an AR bipod before, the TipTop® Tactical Rifle Bipod Quicklock EZ Pivot & Pan QD 7″ – 10.5″ is a good option to consider. The bipod gives you a hint about how to use an AR bipod and what a reliable, sturdy bipod might do. There are good quality materials used on the bipod and here’s our list of pros: 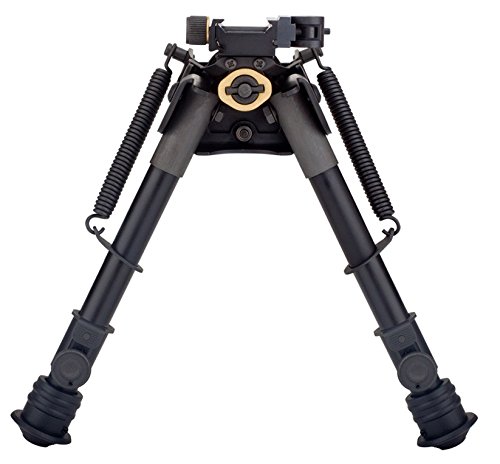 As much as we like the bipod for its qualities, there are still some minor issues that we need to mention:

But, for the money you pay, as you are still new at the shooting, the TipTop might to you good for a while.

One of the lowest AR bipod out there, efficient and reliable is the Harris Engineering S-BRM Hinged Base 6 – 9-Inch Bipod. The bipod is not only adjustable from 6’ to 9” but it also has other good things related to it. Here’s our list of pros:

Despite the pros, some problems need to be fixed and here are the cons:

All in all, the AR bipod is worth every single penny and it’s a great asset for your shooting gear.
The GG&G Quick Detach Standard XDS Swivel Bipod has the ability to cant and gives also a greater range than previous models. The pivot mechanism is very strong and here are our pros: 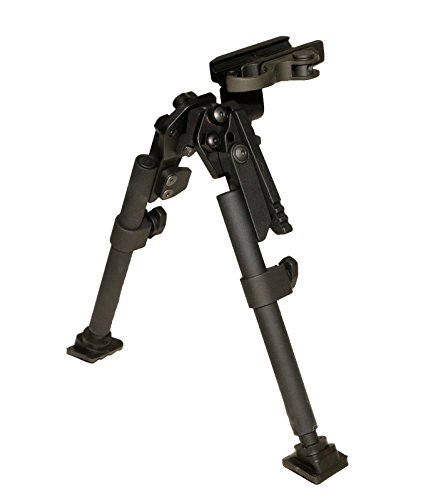 As for the parts we consider cons, here they are:

But, many consider the bipod to be a good addition to your AR anytime.

Another sturdy, reliable, long lasting AR bipod is the Atlas Bipod w/ADM 170-S Lever BT10LW17. Besides the already mentioned good things, there are other nice features to consider on the bipod so here are our pros: 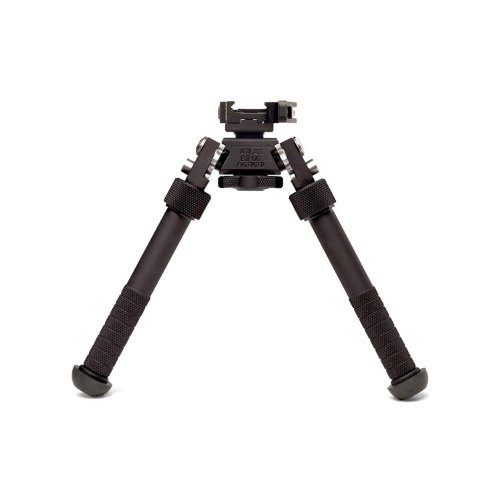 As for the cons, there aren’t many but we still need to mention them:

All in all, even though you chip in with some extra money, the Atlas bipod is a good investment of your money.

When it comes to high end materials used for an AR bipod, there is no better example than the Genuine Accu-Shot Atlas Bipod BT46-LW17 PSR 4.75″ – 9″. The bipod doesn’t only give you great height adjustments, but there are also other good things about it. Here are the pros: 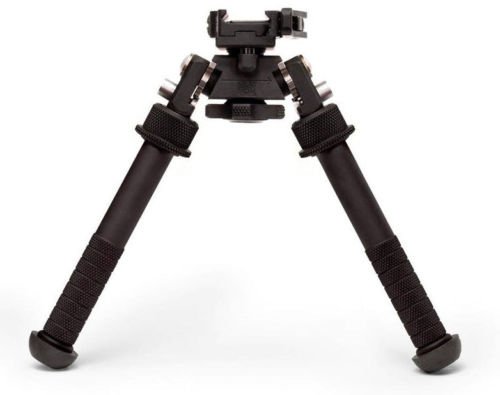 Even though the cons are not deal breakers, we still need to mention them:

All in all, even though this bipod is a high end one, it’s secure, reliable, and worthy to buy anytime.